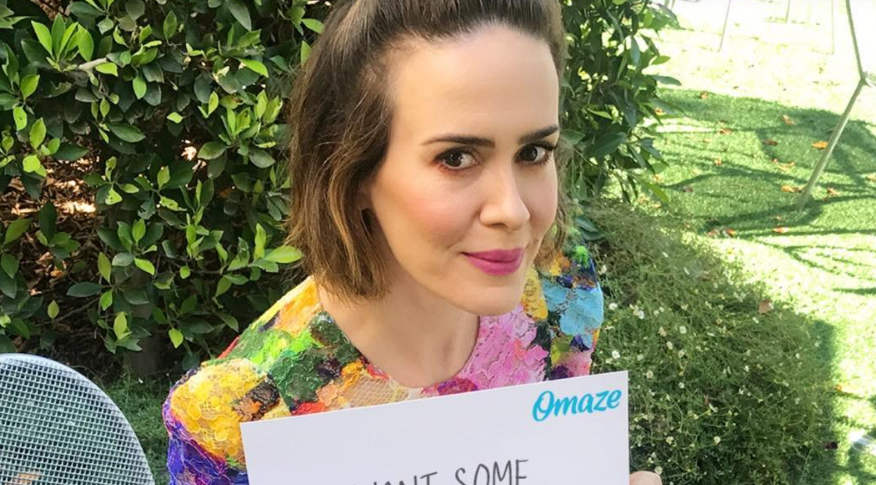 Sarah Paulson is known as the scream queen and has done some epic work on American Horror Story. Her career has also brought us such movies as The Bird Box and Ocean’s Eight. She’s also a hardcore Real Housewives fan. That’s why according to People, Vanity Fair gave her a lie detector test about some of our favorite cast members. She talked all things Lisa Vanderpump and company. The actress even said if her career hit a ‘plateau’, she would consider joining RHONY. Now, that would be something.

Despite being a little nervous someone might come after her on Twitter, she was honest about her true feelings. This fear was valid, as the housewives love to air their beef on Twitter often. She was asked about Bethenny Frankel and Lisa Vanderpump leaving. Paulson gave a true opinion and even talked about meeting one of the housewives.

Happy Birthday to this perfect angel person. @reesewitherspoon I sure do adore you and always admire the way you move through this world- leading with such grace, dignity and that wicked sense of humor. ❤️

What did Sarah Paulson say about Lisa Vanderpump and Bethenny Frankel?

First, Sarah Paulson was asked if she thought RHONY could survive without Bethenny Frankel. She said, “I think the star of the Real Housewives is the franchise itself. So I think it will survive without her, yes.” The actress went on to say she would miss her on the show. She also said she wanted them to bring Jill Zarin back. She agrees with a lot of fans who would love to see Jill back.

When asked if she thought RHOBH could survive without LVP, she didn’t hold back. She said while she didn’t want her coming after her on Twitter, she wouldn’t miss her. She said she’ll miss the dynamic she brought to the group, and the fear she instilled in everyone. The actress then says, “I met her once at a party, she wasn’t that nice to me.” Following that confession she immediately asked if she was going to get in trouble. She then doubled down saying she wasn’t that nice.

Paulson said if she was picking a franchise to be on it would definitely be New York. She said, “New York is my OG, as the kids say.” Paulson also took a stab at what her tagline would be. She came up with ‘always hungry’ just like it says on her Twitter profile. It will be interesting to see if LVP will retaliate on someone like Sarah Paulson who isn’t in the Real Housewives universe. Sarah calls herself a dedicated, devoted viewer of the show.