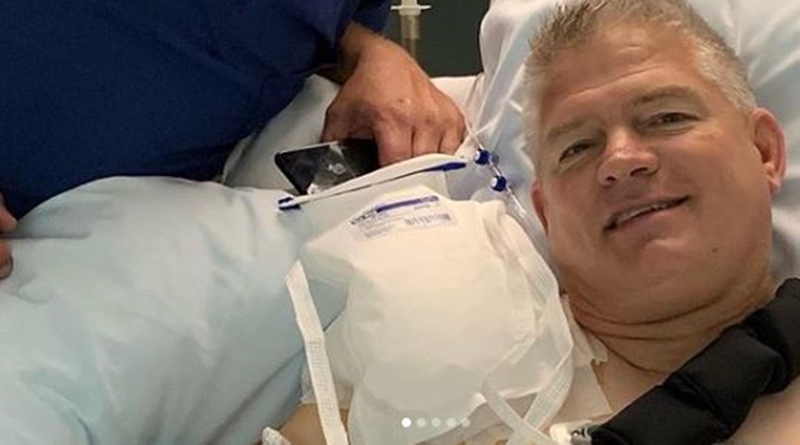 Bringing Up Bates fans know the whole Bates’ family’s very competitive. And, dad Gil hurt himself. Now, he’s recovering from his shoulder surgery in the hospital, but full recovery might take some time. However, it looks like he’s well looked after by family, friends, and church members.

Bringing Up Bates’ dad Gil got competitive, hurt his shoulder

Every season of the show, we see the Bates family competing against each other. The huge family loves to play games and win. Well, dad Gil’s the same, and he also likes to go all out. This time, he was apparently at a youth group for their church when he accidentally pushed himself too hard. And, the painful outcome involved surgery, a stay in hospital, and icepacks. But, to help him feel better members of the church chipped in to make him feel better.

Taking to Instagram on Monday night, the @batesfam account shared some photos. They captioned it with, “Thank you to the many people who have asked about Gil’s recovery, or who sent packages or meals, or just kept him in your prayers! We appreciate the many gestures of love! He’s doing great! And an especially huge “Thank You” to Dr. Rappe and staff with the Knoxville Orthopedic Center.” Letting Bringing Up Bates fans know a bit more, the Hashtags gave it away. They were #RotatorCuffSurgery and #TooManyPushUps.

Recovery should take some time, but Gil’s being looked after

The injury to his shoulder was explained a bit more by @batesfam. They also noted, “push ups lol!!!! Competition!!!! And old age lol!!!!!” In fact, they gave out more info via the Bates Family Blog on September 27. The blog post noted, “According to Kelly, when he preaches to teenagers, he initiates a push-up challenge and promises to do two, one-handed push-ups for every push-up they do. Well, during one of these challenges, he reached 84 one-handed push-ups, and his shoulder popped. The doctor informed him that in order to play basketball with his sons or even do tree work again, he would have to have surgery. ”

Ouch! Well, for his efforts, Gil’s getting really spoiled now. The photos that the @batesfam shared include heaps of Oreos, chocolates and other yummy snacks for Gil. One photo showed Gil sitting up on the sofa, smiling at all his tasty treats. The post also mentioned that some of the pics include photos of friends and church members who made sure to take over meals for them. Some Bringing Up Bates fans noted they also had the same shoulder surgery and it takes a long and steady recovery.

Thank you to the many people who have asked about Gil’s recovery, or who sent packages or meals, or just kept him in your prayers! We appreciate the many gestures of love! He’s doing great! And an especially huge “Thank You” to Dr. Rappe and staff with the Knoxville Orthopedic Center. #RotatorCuffSurgery #TooManyPushUps

It certainly looks that this time around, Gil’s competitive nature got the better of him. Nevertheless, lots of well-wishers sent him their best hopes and prayers for a full recovery.

What do you think about Gil doing so many push-ups that he ended up in hospital needing shoulder surgery? Have you had a similar procedure? Was it a long and steady recovery rather than a quick procedure? Sound off your experiences in the comments below.