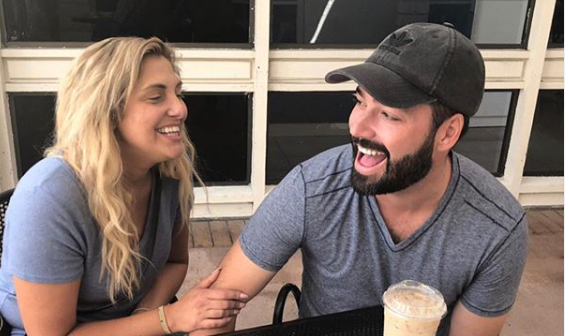 Bravo, News, Reality TV
Share on Facebook
Share on Twitter
Share on Pinterest
Share on LinkedIn
Like most reality stars do, Gina Kirschenheiter of RHOC has taken to social media to reveal the man in her life. In a new post with Travis Mullen she captioned it, “always find a reason to laugh.”
In the picture she and Travis are doing just that, laughing as they sit together at an outside table. Gina is holding onto his arm while they laugh at some private joke.
Fans have been gushing about how cute they are together and think Gina looks very happy. Gina said, “he’s a great person. He’s a really good guy, really sweet, really kind and it’s nothing like I’ve ever really experienced before. I’m just really enjoying being with him.”

Gina Kirschenheiter Still Having Drama With Her Ex

He was recently arrested on suspicions of domestic violence. Gina Kirschenheiter said Matthew had threatened to kill her and choked her. While he was ordered to pay Gina ten thousand in child support he fought it saying he had to resign from his job when he was arrested. He announced that she caused him to lose his job as part of their ongoing public dispute.
He also maintains his innocence against the charges she’s brought to the court. Their three children are dealing with the nasty divorce as well and it can’t be easy for them. While the judge signed off on a dissolution, the two won’t be divorced officially until 202o.

Who Is The RHOC Star Dating Now?

According to US Weekly, Tamra Judge told them Gina Kirschenheiter was off the market earlier in the month. She said he was a good guy, divorced, and had kids around the same age. Tamra said she loves her co-star and is happy for her.
She also said Gina was in a good place despite her ongoing drama with her ex Matthew Kirschenheiter. Gina does seem to be in a good place. She told US Weekly Travis has her considering the possibility of getting married again. Gina stated she already had her kids so she didn’t see what the point would be. The mom of three said at first she was totally against it, but now she’s staying open.
She said they were set up by a friend and just have a really comfortable relationship. She said he has nothing to do with the reality television world. Gina deserves some happiness, and a guy outside of the RHOC world might be just what she needs.