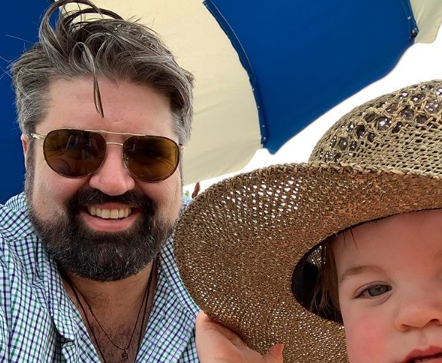 The shocking audio released allegedly showing Amber Portwood chased Andrew Glennon around the house and hitting him struck a nerve with fans. Many of the Teen Mom OG fans have reached out to MTV and asked why they haven’t nixed filming Amber.

Not only did the audio show she lividly chased him for waking her up in the afternoon, it showed her threatening. In the audio Amber Portwood threatens to kill Andrew. Now, he’s got a bone to pick with MTV. And, he’s doing it through Instagram. Andrew came forward with some of the things he’d had to endure once the audio came back. He stated Amber had been rough with James, and shoved him for getting into a cabinet.

Fans have been supportive of Andrew on Instagram. They’ve told him he’s a good dad and did the right thing getting his son, James out of the situation.

The Bubbs. 🙂 Most curious and loving man I know. Able to reverse engineer anything and leave it a mess in a single bound. 💪🤩

What Andrew Glennon Said About Amber Portwood Keeping Her Job

As are several Teen Mom OG fans, Andrew is wondering why MTV is allowing Amber to keep filming. On his Instagram story, he posted a few posts aimed at his ex. He captioned them with things like, “America: Bloody your ‘soulmate,’ win a job.”

Most of the posts were in the same vein with the last saying, “abusing your family is a choice, not a mistake.” The Ashleys Reality Round Up said their exclusive source told them Amber hasn’t been fired and was indeed filming. Former Teen Mom Farrah Abraham slammed the show for supporting her. She said it was encouraging child endangerment and anyone in the cast supporting her was an unfit parent.

After he posted those stories, he moved on to sharing inspirational quotes including one from Denzel Washington. It read, “some people will never like you because your spirit irritates their demons.”

Amber has also been told by her lawyers to stay, off social media, according to the source. Her account still has the advertisements for Teen Mom and other reality shows running on her stories. Amber will have to go to several court dates and fans can’t help but wonder if MTV likes the drama.

Stick with TV Shows Ace for the latest Teen Mom OG related news. And, sound off with your thoughts on Amber Portwood continuing to film in the comments down below.