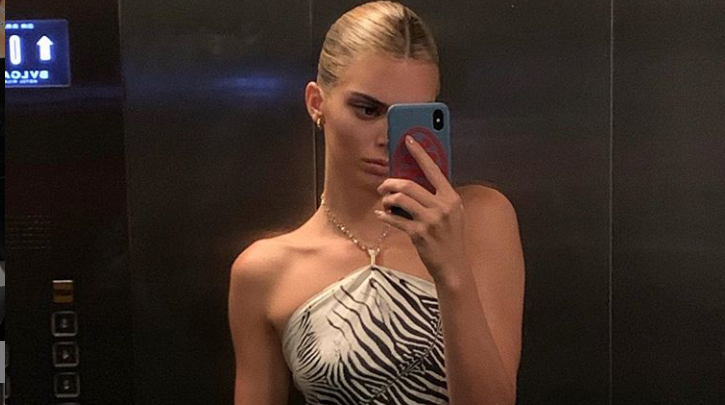 Kim Kardashian and Kendall Jenner were on hand at the Emmy Awards to present for Outstanding Competition Program. The two stunned on the red carpet. Kardashian wore a slim fitted, low-cut black Vivienne Weston according to W Magazine.  Jenner wore number straight from the runway of Richard Quinn . The dress featured a rose covered body with a latex turtleneck and mermaid bottom.

The moment that had Twitter going crazy was when they accidentally told a joke they weren’t in on. As the teleprompter guided them in what to say, both girls were stunned for a minute when the audience erupted into a fit of laughter.

What Did Kendall Jenner And Kim Kardashian Say To Get Laughed At?

According to US Weekly the two walked out onto stage and begin their short introduction. Kim Kardashian said, “our family knows firsthand how truly compelling television comes from real people just being themselves.”

This earned a huge laugh from the audience the two reality stars had not expected. Kendall Jenner had the next part and continued saying, “telling their stories, unfiltered and unscripted.”

One Twitter user said that the KKW founder told a joke and didn’t know it. Another said, “did the entire audience laugh at them?”

Of course, they have their supporters too. One fan said they just wanted to give a shout out to the two of them for doing a fantastic job presenting. Another tweeted they were sorry the Emmy audience was so disrespectful to them.  The fact that reality shows are often re-shot to get the perfect look or the most drama is well known. The, “real people just being themselves,” line tickled the audience because they know this. It’s also long been speculated according to Cosmo that the weddings, relationships, and even the Jordyn Woods and Tristan Thompson cheating scandal are all huge publicity stunts. It’s important to note, it’s been denied by both parties and Kylie and Jordan don’t hang out anymore, so that one might be real.  Kylie also was announced as a co-presenter with her sisters according to Elle, but was reportedly sick and couldn’t make it.

The Younger Sister Also Got Dragged For Her Outfit

Several people posted pictures of the bondage monster from American Horror Story in comparison to her outfit. More than likely the famous sisters will laugh off anything that is said about them at the Emmy Awards. They’re used to being talked about in both a positive and negative way.

‘Chilling Adventures Of Sabrina’: Kiernan Shipka Comments On Her Character’s Fate
‘Bachelor’ Fans DEMAND ABC Make A Statement Against Bullying
Why Is ‘The Young And The Restless’ Teasing Another Victoria, Billy, Lily Love Triangle?
Who Is Teddi Mellencamp Pulling For On ‘The Bachelor’ This Season?
Danielle Busby Having A Boy? ‘OutDaughtered’ Mama Spills Her Thoughts