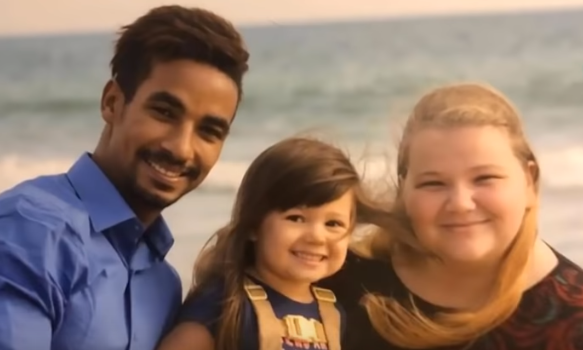 Nicole Nafziger recently confirmed that she and her long-distance love, Azan Tefou are currently still together. Though, they have no plans to get married anytime soon. While Nicole had been responding to a comment about her relationship on Instagram, she explained they had decided to wait until the right moment.

Nicole Sets A Commenter Straight After They Make Some Hefty Assumptions

Life is Beautiful. It truly is. Always find the positive in your situation. Don’t let negativity rule your life. It’s your life to live and you deserve to be happy😊 Peep my mom in the background. I loved this picture too much not to post it 😅 #positivity #positivethoughts #lifeisbeautiful

The TLC star was grilled by a commenter about her romance with the Moroccan native. The commenter said Nicole hasn’t always been “honest” with them. Harshly saying she should stop wearing the engagement ring on her left hand, as there won’t be “any wedding.”

Nicole felt it necessary to set the record straight, so she replied with a lengthy comment explaining her point of view. She began, “One, don’t act like you know my life. You do not. No matter what you think, you don’t know me.”

“Two, my family knows everything. From the beginning and all through filming for a show, they know everything,” she continued. She noted that the producers don’t show everything in her life with the world. Not everything needs to be public knowledge.

“Three. If you want me to be honest, then listen when I’m telling it and not when it’s what ya’ll think is the truth. Azan and I are still together happily,” she confirmed the relationship and that they’re still going strong.

“We don’t have plans to get married officially at this moment because I’m doing my life here with May right now and he’s working doing his life there right now,” Nicole explained. “That doesn’t mean we won’t, it means we’ll do it when the time is right for us.”

To conclude her explanation, she reminded her fans not to believe rumors. “Trust me or not, that’s not my business. I don’t put all of our life out there. That’s not called lying, it’s called privacy. Good day.”

She tends to forget that when you are on a reality television show you don’t get very much privacy. They chose to live that life.

There’s No Rush For Them To Get Married, But There Is Too Much Pressure

Though, on two separate occasions, the couple had called off their engagement. According to InTouch, Nicole later explained that they weren’t in a rush to make things official. She addressed feeling as though there was “too much pressure” and “not enough time or money” for a wedding. Rember she had money that was supposed to go for a wedding and then for some store that never happened.

Viewers may know, Nicole Nafziger and Azan Tefou found their spark through an international dating app. Nicole currently lives in Florida with her daughter May, who she recently enrolled in school. Azan lives in Morocco, meanwhile. The long-distance couple has been making things work by keeping regular contact through video chats, calls, and texts.

Don’t miss 90 Day Fiance when it returns to TLC.

‘RHONY’ Season 13 Reunion Canceled: What Does This Mean For The Show?
‘SW’ Janelle Brown’s Dogs Are No Match For RV Life Creatures
Maurissa Gunn Reveals Juicy Boom Boom Room Secrets
Tayshia Adams Dishes Reasons Clayton Echard Would Be A Great ‘Bachelor’
Why Kim Kardashian Claims She Is Moving Out Of Her $60M Mansion