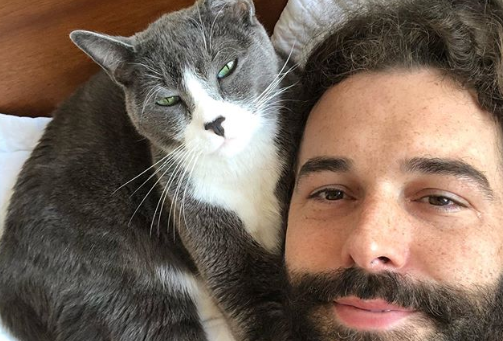 Jonathan Van Ness is so fun to watch and he’s hilarious. The episodes he did for Gay Of Thrones were genius. He recently released some personal news and all of his Queer Eye co-stars are offering their support.

Ness announced he’s HIV positive in his new memoir, Over The Top, soon to be released. In the story he revealed he was diagnosed with the disease at the age of 25. Not only does the now thirty-two year old talk about his health but his demons. He revealed he also a history of drug and sex addiction.

What Is Jonathan Van Ness Revealing In His New Memoir?

According to The Blast, Ness said about the memoir, “I’ve had nightmares for the past three months because I’m scared to be this vulnerable.” He goes on to say these are issues that need to be talked about.

The Queer Eye beauty guru said he found out about the HIV after he fainted while cutting a client’s hair, the New York Times revealed. He said part of the reason he engaged in self-destructive activities was because he had been abused by an older boy.  Ness said he spent all his money on drugs in college and then advertised to be intimate with others for money online. He’d gone to rehab twice in his life for drug use.

Jonathan Van Ness said he decided to talk about it now to use his platform. He wanted people to realize you’re never too broken to be fixed. He posted on Instagram that this was the most important opportunity and his co-stars sent their support.

Antoni Porowski said he loved him and was proud of him while Tan France did the same. After the announcement Jonathan said he’d be taking a few days to rest according to Independent. Understandably dealing with the stress of such a reveal had to be taxing. He hopes coming forward will help take away some of the stigma surrounding those who live with HIV. He thanked his fans for the hundreds of messages of support. Ness posted, “Taking the next few days to rest up, spend time w my bittens and mom before the book tour get going.. I know it’s going to be a lot of hard work but I’m ready.” Those are some lucky kittens!