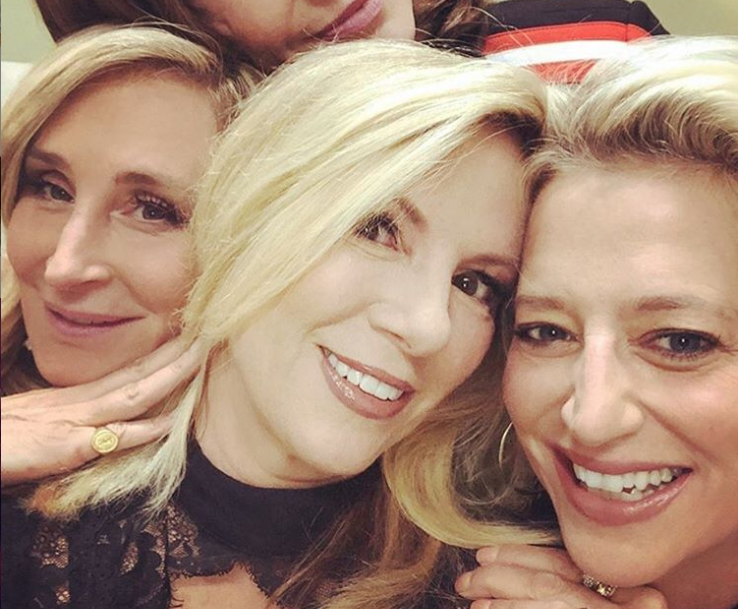 Sonja Morgan and Dorinda Medley of RHONY need to remember someone is always listening. When watching a runway show during fashion week, the two reality stars made belittling remarks about transgender models, according to The Daily Beast. It seems the two were caught on Sonja Morgan’s Instagram story when they were talking about Yasmine Petty and Miz Cracker took the runway.

The reaction of their social media community was instant causing the two to issue a quick apology. Will it be enough to save their careers? Some fans aren’t so sure and feel they should be made an example of.

What Exactly Did Sonja Morgan and Dorinda Medley Say At Fashion Week?

During the Garo Sparo show, Sonja Morgan was seated with Dorinda Medley, Ramona Singer, and Luann de Lesseps. Tinsley Mortimer was walking in the show and they were there to show their support. As Yasmine Petty took to the stage, Dorinda started to film a video to post to Instagram.

Although the video came down quickly, the damage was done. Their social media has blown up with people telling them they were wrong.

One poster said, “How could u say something so disrespectful & petty? I honestly thought u were an ally 2 us all, not just ‘the gays’ u so lovingly claim. This is just further proof that u shouldn’t ever meet ppl u look up to…they always disappoint u.”

Yasmine Petty also responded to the reality star’s diss. Petty said, “It’s pretty disheartening and disappointing, especially this day in age and being in New York City. I was really excited to do the fashion show for Garo Sparo for New York Fashion Week because he was using models of diversity, and I knew they were filming the Housewives of New York and I knew they were front row and literally, as I was walking down the runway, I heard them making these statements.”

So, not only did Sonja Morgan and Dorinda Medley make the comments, the models heard them.

The Ladies Apologized, But Is It Enough?

Sonja and Dorinda made a quick statement they told to Page Six, ““We have a history as longstanding supporters of the LGBTQ community in many ways and apologize for our offensive comments at the fashion show.”

Only time will tell if this misstep could get them the boot.