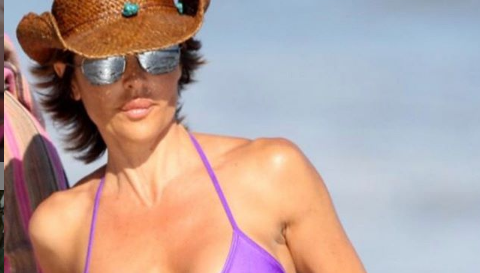 When Lisa Rinna got home from supporting Kyle Richards at New York Fashion Week, there was a surprise waiting for her. The power company had put a metal power pole in her yard according to Bravo. She was not happy about it at all.

She took to her Instagram story to share her disbelief. Rinna said, “Harry Hamlin is going to freaking have a conniption when he sees this pole in his sanctuary backyard.”

She showed a video of a very large metal power pole in their yard. The reality star said she didn’t know what was going to happen when Harry saw it. She stated it was a huge eyesore. The pole really is an eyesore and it’s huge, fans were shook waiting to see just how Harry was going to react.

Lisa Rinna said she and her husband knew they were going to replace a pole nearby but were never told another one would be put on their land. Lisa said she guessed it was just done a couple of days earlier because the cement was fresh. She then said, “I’m going to be fried, I’m sure. All these wires are so bad for you. Probably my mind is being fried right as I stand.” She continued to stand there with the pole after saying that.

The Pole Appears To Be Stories Tall In Her Backyard

She stood in awe of how tall it was telling fans you could climb it if you wanted to. A few hours later she gave an update after Harry saw the pole. She said, “this is so our neighbors can have power, it has nothing to do with us.” It’s unclear if this means getting it removed will take away the neighbors power.

Harry tells me this is all going to be coming down. He’s telling me that. He has people. He has his people and he’s ready.” She said it wasn’t likely to happen that day so stay tuned. Then the next day she shared more. Lisa Rinna said, “there are people involved now, people of the law.” She said Harry told her it was coming down and going underground. Fans will stay tuned to make sure it does. If not, you know she will have something to say.