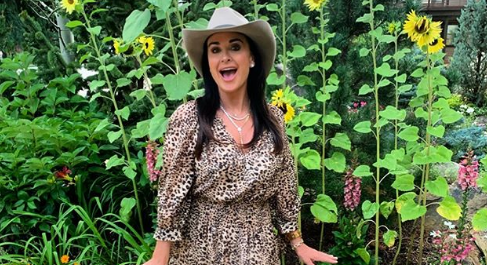 The Real Housewives are no stranger to legal battles when it comes to their husbands. Dorit Kemsley just had thousands of dollars seized because of her husband’s legal trouble. Now it seems Kyle Richards is going to have to deal with another one. Her husband, real estate broker Mauricio Umansky, is being accused of fraud with a mansion sell.

According to The Blast a new lawsuit is coming against him from an incident in 2016. The celebrity broker had a high end property for sale in Malibu. The property belonged to the son of the President of Equatorial Guinea.

In the court documents it stated the home had been seized by the US government because of a criminal investigation. In the settlement the son agreed to sell the house and give ten million of the profit to charity for Guinea.

My girls and I wearing @kyleandshahida on the way to the show! So excited 💃🏻💃🏻💃🏻

What Did Kyle Richards’ Husband Do To Get Sued?

Kyle Richards’ husband listed the house for 32 million. Sam Hawkim who wanted to buy the mansion filed a lawsuit saying Umansky put the house of sale for far below what it was worth. He thinks it was so the broker could buy it himself without anyone knowing and profit from it. Eventually Maurico flipped the house and sold it for 70 million.

The potential buyer, Hakim, made an offer of 40 Million on the house and was told to not, ” put it in writing.” He found out later it was so Umansky could buy it himself and make money off it later. Umansky had listed the house at 32 Million which was way less than what it’s worth.

The documents say the, “egregious breaches of duty and other despicable conduct,” plus the lack of cost money and he is suing for 35 Million which is what he could have made. Kyle Richards is used to this kind of thing. It wasn’t to long ago Umansky’s insurance company sued him according to Radar Online. That lawsuit was finally dismissed, but Mauricio denied any accusations against him.

Mauricio Umansky hasn’t made any statements regarding the new lawsuit yet. No word on what Kyle Richards thinks of this whole thing. If she takes tips from co-star Dorit Kemsley and others she’ll probably stay quiet until the matter is settled.