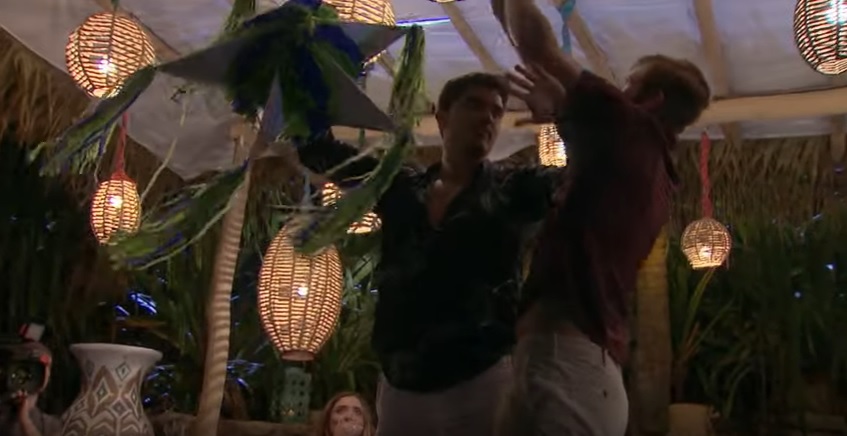 Bachelor in Paradise bartender Wells Adams is speaking out about Jordan and Christian’s fight, saying Jordan wanted “to stir stuff up” in Season 6.

Bachelor in Paradise Season 6 will forever be known as the season where Jordan Kimball and Christian Estrada were kicked off the show for fighting over a pinata. It was one of the most shocking, and ludicrous, moments in Bachelor history.

That also means everyone wants to talk about it. Bachelor in Paradise bartender Wells Adams is talking, and he has a theory on why Jordan and Christian came to blows.

The infamous fight started with Christian’s courtship of Nicole Lopez-Alvar. Christian had set up a whole date night for Nicole, including a pinata. But Nicole was also flirting with Clay Harbour, and Clay was friendly with Jordan.

So when Jordan saw Christian moving in on his friend’s love interest, he decided to wreck the date. Jordan grabbed the pinata, and then Jordan and Christian were grabbing each other.

Both were immediately kicked off Bachelor in Paradise since the show has a “zero tolerance” policy on fighting.

You can watch the fight again by playing ABC’s video clip below:

What Wells Adams is saying

Wells, asked about the fight in an interview with Women’s Health, has a different idea about the fight. He thinks Jordan might have been trying to create some buzz since he wasn’t making a splash in the romance department.

“I think that he came there with the intention to find love and everything, but desperate men will do kind of desperate things,” Wells theorized. “I think maybe there was a, ‘Well, I’m gonna stir stuff up somehow’ kind of thought.”

He also criticized the fight as a whole: “If you think coming on the show and doing something like that is ever a good look, it’s just not. That was stupid.” He does have a great point.

So was Jordan fighting Christian just for publicity? While Wells could have a point (Jordan also got into a skirmish when he appeared on Paradise last season), the only people who know what happened are Jordan and Christian.

Both are expected to appear in tonight’s Bachelor in Paradise Season 6 finale. The latter portion of the episode is an in-studio reunion show. Chris Harrison will almost certainly ask about the fight, and hopefully, get some answers from both parties.

If the point of the fight was to get people talking, that happened. But this probably ruins Jordan’s chances of being the next Bachelor. Don’t miss watching the season finale of BIP tonight on ABC.