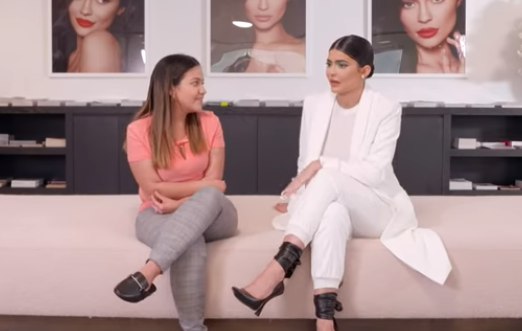 Kylie Jenner has been feeling quite generous lately during her partnership with Ellen DeGeneres. On the premiere of the 17th season of Ellen, Jenner brought on a single mother and her supportive daughter. The mother and daughter were brought to tears with Jenner’s generosity, as well as the school the mom works at.

Kylie Takes Control And Puts Stormi In The Hot Seat

Even as one of the world’s youngest business moguls, Kylie took time out of her busy schedule to answer Ellen’s “Burning Questions.” She even brought along her daughter, Stormi Webster to help her out. Kylie even put Stormi in the hot seat with a burning question of her own!

Even without Ellen on hand to add her signature humor to the situation, her team threw in illustrations and animations. This brought Kylie’s answers to life, helping viewers feel her pain when she was asked what Stormi’s biggest mess was.

“Recently, she’s really into M&M’s. She gets the M&M’s and she melts them in her hands,” Kylie answered. Then turning to Stormi, she continued, “And then you put them all over my white couch!”

According to TooFab, Stormi didn’t seem too concerned with what her mother had mentioned. A little mess-making machine!

we took our baby on an adventure yesterday 🤠🦋💛💛 ugh i love this little girl so much. not only do i think she‘s the cutest thing in the world.. she’s got the sweetest, smartest, most special little soul 💛💛 p.s. the pat on the back at the end of the video gets me every time 😫

Kylie Expresses Her Love For Her Daughter Through And Through

Many of Kylie’s answers were about her love for Stormi. She was asked what the best thing Travis Scott ever gave her was, her answer was quite obvious. Ellen also asked what’s the funniest thing he does, Kylie talked all about how she loves watching him and Stormi play together. Kylie also said her dream collaborator would be her daughter.

Though, when she asked Stormi, “Who loves you most?” Without hesitation, Stormi said “Daddy!”

Ellen asked Kylie what secrets she kept from her parents in high school, forgetting who her parents are. Or specifically, who Kylie’s mother is.

“My mom goes to sleep really early and she wakes up really early so I only had until about 4 in the morning to sneak back into the house,” Kylie explained. “I thought that I was being very secretive. Once I did that consecutively for like a week, she was like, ‘I need to talk to you today.’ She sat me down and she was like, ‘I’ve heard you come home every single morning for the past week at four in the morning. This needs to stop.'”

A lesson learned that day, and likely many other days, “I can’t really keep any secrets from Kris Jenner.”

The random question of what Travis Scott smells like popped up. To start, Kylie didn’t seem like she could come up with an answer. She noted he showers daily so, “he smells like a fresh shower.” Then adding that he smells like cologne. Only after answering another question, Kylie chimed back and added with a grin, “Wait! He also smells like weed a lot.”

A Big Surprise Brings Tears To Everyone’s Eyes, On And Off Camera

Later in the show, Kris Jenner came to help Kylie surprise a deserving young woman. She had dropped out of college to help her own mother, a struggling teacher in an underprivileged district in the Bronx. Kylie gave the daughter a tour of her business empire, gave her a makeover, then the real surprise came. Kylie started handing out checks.

The first surprise was a check for the mother’s school for $50,000, to help them serve the kids better. The next gifts were the real tear-jerkers, not just for those on camera. Kylie really showed her generosity with two $100,000 checks for the mother and daughter. She gave them this to get back into school and also be able to relax a little bit in their lives.

It truly was a beautiful moment of generosity to watch.