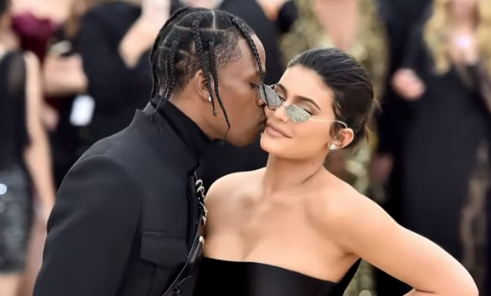 Kylie Jenner and her baby daddy, Travis Scott have got themselves a cover of a Playboy. These new parents of their one-year-old daughter Stormi Webster pose on the front of the magazine’s fall 2019 Pleasure Issue. The issue is scheduled to release on the 17th of September. Knowing Playboy, rest assured the photos are NSFW.

don’t ever sleep on yourself 🖤

ET discussed just a decade before, her older sister Kim Kardashian did the same. Her cover issue was published back in December of 2007. Khloe Kardashian had been rumored to pose for the magazine in 2014, but it never came to be. Jenner must be following in their footsteps.

Kris Jenner, back in 2014 said she would never pose for Playboy. “I don’t think anybody wants to see me without any clothes on,” she said, though she did explain she works hard to stay in shape. “The older you get, the harder it is. I love to work out and love to feel like I’m in shape and I like to feel good about myself,” Kris said. “Last summer I posted those bikini photos because I thought it was so inspirational for someone in their fifties to have some motivation and say, ‘Wow, anybody can try to put a bathing suit on.'”

Kourtney Kardashian and Kendall Jenner have also posed without clothes on before, not for Playboy though. Kourtney posed in support of her lifestyle site, Poosh. Kendall took some photos like this over the summer, later shared by the fashion photographer Mert Alas.

Kylie Gave A Sneak Peek Of The Shoot On Her Instagram

A picture of her and Travis Scott was shot by her go-to collaborator, Sasha Samsonova. Jenner was wearing nothing but a cowboy hat, paying homage to Travis’ home state of Texas. She was snuggled up to a shirtless Scott outside under a tree. The risqué photo was captioned, “When Houston meets LA…” with Playboy tagged and included the hashtag “Coming Soon.”

Playboy also shared some pictures on its Instagram page. It appears to be a three-picture set of a red-lipped Kylie leaned against a shirtless Travis. The three captions of the pictures say, “Wild In Love.”

According to Bazaar.com, Playboy’s website has a conversation with Scott and Jenner for the upcoming issue. They quoted, “You’re my best friend. Through all the ups and downs that every relationship has, we evolve together through them and keep getting stronger.”

This is just the most recent of the couples loved-up, PDA-filled appearances. The last was at the premiere of Scott’s Netflix documentary, Look Mom I Can Fly, a few weeks back. Before that, Jenner’s luxurious birthday celebration in Italy was the destination of their romance.

Jedidiah Duggar Packs On The Pounds, Katey Nakatsu To Blame?
‘Signed, Sealed, Delivered’ News: Eric Mabius Shares Apology, Latest Filming News
Oops! Did Isabel Roloff Accidentally Spill Her Baby’s Name?
Meri Brown Gets Cryptic About ‘Being Broken,’ Is She Alright?
Todd Chrisley Reaching Out To His Hurt Child, Which One?