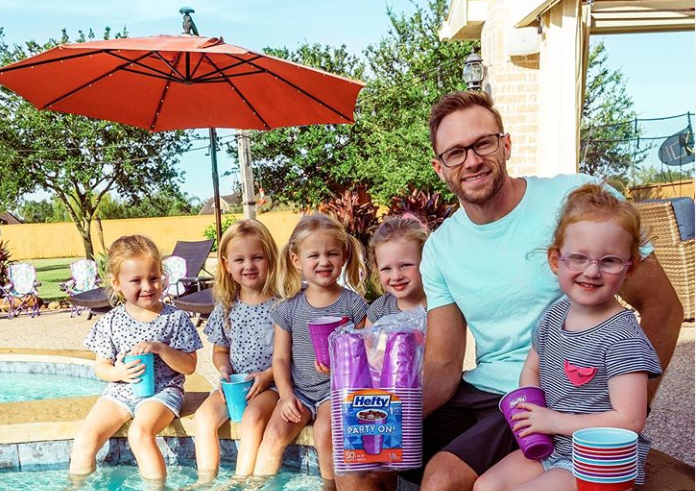 The new season of Outdaughtered looks like it’s going to be a ton of fun. The quints are turning four and as Adam Busby put it, “it’s birthday season in the Busby house.” Blayke is turning eight and all the girls are running around and screaming in the trailer. The Season 6 trailer posted on Instagram according to Cheat Sheet showed a lot of changes in the Busby house as well as a bit of turmoil. The quints are definitely coming into their own little personalities and they are mostly different. The new season is set to premiere in October and the only set of female quints are ready to go.

What Did The Outdaughtered Trailer Show Coming Up?

Riley, Hazel, Ava, Olivia, and Parker are full of energy along with their big sister Blayke. In addition to some girly birthday cakes the trailer also shows mom, Danielle telling the girls they’re in real panties now so no tee-tee in the bed. The next shot shows a bathroom that’s been TPed and someone put lotion all over the toilet. Adam says, “it’s like we’re entering a fournado.” That’s one way to put it for the behavior of the Outdaughtered adorable cast

There’s also a clip of Danielle talking about the quint’s teacher moving Riley up to Kindergarten. The little girl is distraught and says, “It’s scary to go in a new class. I wish my sisters was in my class.” Fans hearts break a little. Adam says, “Riley is way too smart for her own good,” Adam mentions, “especially with her being so strong-willed.” As they said on their Instagram, she tested so high she’s going right into kindergarten.

Could Their Be Trouble In The Busby’s Marriage

Fans of Outdaughtered worried the stress of raising six girls, could cause trouble in their marriage.  In the trailer Danielle gets mad at Adam for going to Dallas to take care of a few things. In the last season Adam got an offer for a job in Dallas, but Danielle didn’t want to move. Then, he took a different position that would give the family more money without having to move. Danielle had become upset he didn’t ask her before he accepted. Now in the trailer he says he doesn’t know why she’s mad he’s going to Dallas. Adam said she knew it was coming.

In the trailer, Adam says, “Why am I being vilified for trying to provide for my family?” Danielle says, “Because you don’t want to do what I do and I do everything around the house.”

Adam responds with, “apparently you’re not doing a very good job.” Danielle then almost swears as she looks like she’s going to blow her top. She says it’s not fair that he gets to be the fun dad all the time. At the end of the Outdaughtered trailer he shows up with a puppy and if looks could kill Danielle would have dropped him where he stood.