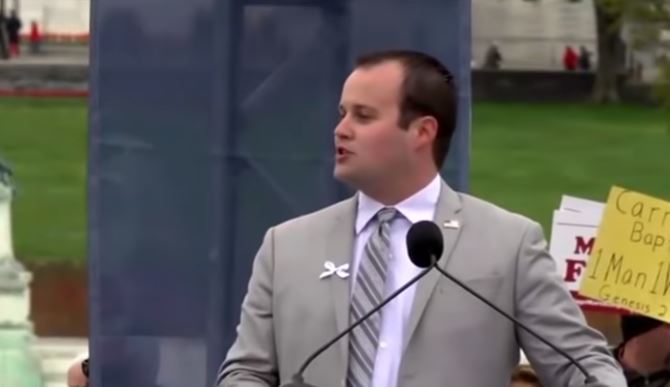 Josh Duggar retired from politics and faced disgrace over cheating allegations. Tucked back under Jim Bob’s watchful eye in Arkansas, he failed to bring any relief from scandals that plagued him since the molestation allegations that killed 90 Kids and Counting.

TV Shows Ace reported that quite a lot of the Duggar kids work in real estate, and Josh is no exception. But, Josh ran into trouble again and seemingly lost his bid to stop a lawsuit over property his company acquired.

Radar Online broke the news about the lawsuit for land allegedly acquired illegally by ALB Investments, LLC. Back in July, they reported, “Two months after filing a motion to dismiss himself from a real estate lawsuit brought against him by Arkansas resident, Carl Echols,” he approached the courts. He requested “that his company, ALB Investments, LLC, also be removed from the case.”

The backstory involves some land Echols purchased from “Edward L. Lewis, in 2016 for $17,500.” He’s the cousin of plaintiff Carl Echols. But, since then, Edwards allegedly sold the property to Josh Duggar’s company. And, the ridiculously low sales price of $1,000 rankles. Since then, he sued his cousin and brought a lawsuit against ALB Investments, LLC. What upset him, even more, is the fact he paid property tax for years on it. It seems Josh should have conducted a full title check, and that never happened.

Keeping an eye on the lawsuit, Radar Online updated about it on September 9. Josh Duggar’s efforts to get the lawsuit dismissed failed. According to new court documents, Radar noted, “The above-captioned cause is hereby set for a three-day jury trial beginning on April 27, 2020 at 8:45 a.m., in Room 208 of the Benton County Courthouse, Bentonville, Arkansas.” Essentially, that means Josh lost his bid and now he faces a court hearing.

While the outlet notes August 9 saw the legal team for Josh Duggar request “a motion to dismiss… a judge has yet to rule on the request.” In the meantime, a Judge from Benton County circuit filed the jury trial order a few days ago. Really, things don’t look too positive for Josh. And, no doubt when the trial happens, even mainstream media might show up for the outcome. People who watched the 19 Kids and Counting and Counting On shows, don’t necessarily love the Duggar family.

What do you think about this legal mess surrounding Josh Duggar who seemingly lost his bid to stop the lawsuit over property acquired By ALB Investments, LLC? Do you think that they should be aware of the need to check full title listings? After all, the Duggar family’s been involved in real estate for years. Surely by now, Jim Bob should have taught them all the necessary ropes. Sound off your thoughts in the comments below.

Remember to check back with TV Shows Ace often for more news about the lawsuit against Josh Duggar.