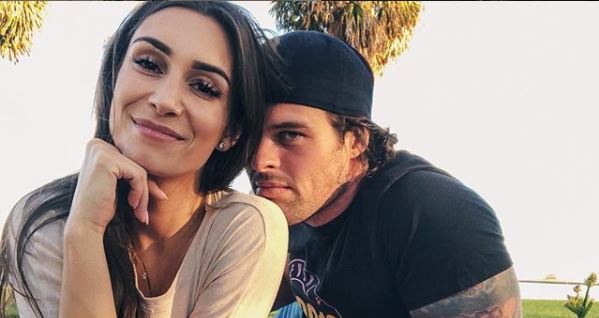 Bachelor in Paradise stars Kevin Wendt and Astrid Loch are engaged! People shared the news today that the couple are ready to tie the knot.

If you remember, Astrid was on the United States version of The Bachelor. Kevin is actually from the Canada version. It was nice to see a new face and these two fell in love.

The couple lives in Toronto together. E! Online shared last month about the couple who had been together for a year. Kevin shared that they were really happy together. He said, “We just enjoy each other’s company. We cook every day. We watch TV, we work out every day and we eat ice cream sandwiches. Stuff like that.” They also knew they would never elope because their moms would kill them.

You’ll never walk alone again. From here on out, we run together. Astrid you are my family, babe. Forever. (See my stories for the adventure/most nervous I’ve been my entire life!!!)

Kevin admits that this was the most nervous he has ever been in his life. He had Dan + Shay’s song Tequila ready to play for them as he took her on a picnic. Kevin even had photographers hiding out. Astrid had no idea this was the day she had been waiting on.

Here is what Kevin had to say about it.

“I actually forgot what I said. I just remember, it was a no-brainer to marry her. I see her more as my family than any kind of girlfriend, and I just knew I couldn’t ever let her go. And then I quickly told her to move her bike because the ring box was so big and it was in my little backpack beside the picnic stuff that I didn’t know how to get it out of there. And so I told her to move her bike, and she kind of looked me like I’m an idiot. Like, why don’t you move it? And as soon as she turned her back, I grabbed it and crammed it in my back pocket. And I don’t know if you know, but skinny jeans are not easy to cram things into.”

Astrid admitted that she had no clue it was happening. It sounds like Kevin did a great job hiding it all from her. He did a ton of research on rings to find what he thought she would like. They didn’t even shop for rings together.

He almost proposed while they were in Mexico recently for Rachel and Bryan’s wedding. Instead, Astrid got food poisoning and he decided to wait to do it till they got home.

Loch says that after leaving the show she told a friend Kevin Wendt was the person she would marry. It sounds like she got it right. Fans can’t wait to hear that this couple has tied the knot.

Kevin shares more on his story

Kevin Wendt saved videos before he proposed. He showed the picnic backpack he bought to take. Kevin Wendt said that he had the ring he had to sneak over. He videoed her talking about an adventure on their bikes, but she had no clue what was going on. They even showed where the photographers hid out before the big moment.

Do you think that Kevin Wendt and Astrid Loch are a great couple? Share your thoughts in the comments. Don’t miss new episodes of Bachelor in Paradise on Monday and Tuesday on ABC.