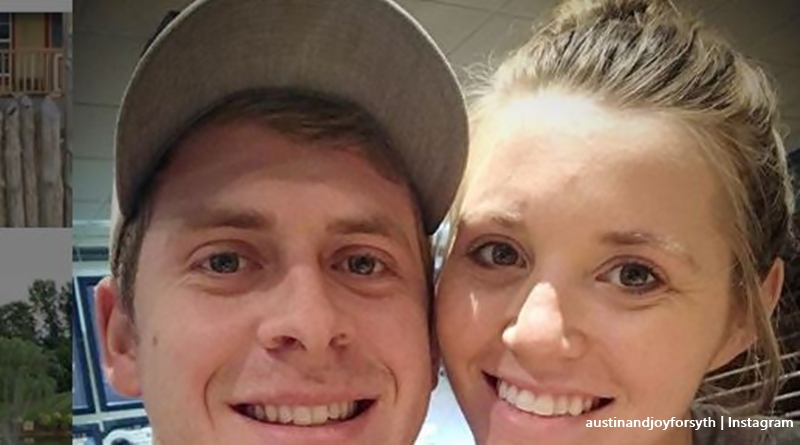 Counting On couple Joy-Anna and Austin Forsyth got married in 2017. 39 weeks later, they welcomed their baby Gideon into the world. Of course, the gutter press speculated she and Austin may have had a shotgun wedding. However, it’s entirely possible she fell pregnant shortly after their wedding.

Now, we see a close and loving couple who dote on their son Gideon. A few days ago, Joy-Anna and Austin shared a photo on Instagram, of them holding hands. Their fans love the symbolism of the picture.

In their Instagram post, we see a picture of the couple holding hands. Joy-Anna captioned it with, “‘The spaces between my fingers are right where your’s fit perfectly’🎶” Plus, she added the hashtags, “#manlyhands, #mybestfriend, and #justholdmyhand.” In the picture, Austin looked like he had a minor injury from his work. Well, fans know he works with his hands a lot. In fact, often, Joy-Anna’s right there with him, helping out.

Commenting on the symbolism, many Counting On fans agreed that there’s nothing wrong with a working man’s hands. @mommyg63 commented, “Nothing sweeter than holding the hands of a husband that works tirelessly for his family. Each callous, scar and crack tells of the love those hands sacrifice for.” Then, another fan noted, “That’s so sweet. Austin is a hard working man with his blisters and calluses. But he’s soft and loving for his family. The kind of man girls dream of!”

Hand-holding’s a special bond between people across the world

Across the world, people hold hands as a sign of affection. In certain countries in Africa, men will hold hands as a way of expressing their bond with a friend. In most western countries, kids hold their parent’s hands, until they get to school age and become awkward about it. With some cultures, lovers hold hands to signify their closeness. And, between happily married couples, it’s a special symbolism of continuing devotion to each other. Most fans of Counting On are familiar with the lovely feeling of having someone’s hand to hold.

As @cindy.keith noted, “Thay are hands that work hard [taking] care of his family!!!!!” Next came @ta_lori with, “My husbands father and mother always held hands walking standing, etc. I thought what a beautiful thing to see an older couple still treasuring each other. When you hold hands [it’s said] you are united together. Hand holding is a wonderful thing.” Plus, Counting On fan,@keelin5513 suggested they, “Hold on to each other always 💕.”

What do you think about the sweet photo they couple shared with their fans of them holding hands? Do you love the symbolism of hand-holding? Do you remember the first time you held hands with a special loved one? Sound off your thoughts in the comments below.

Remember to check back with TV Shows Ace often for more news about Joy-Anna and Austin Forsyth of Counting On.

Kourtney Kardashian Ready To Take The Next Step With Travis Barker?
‘Bringing Up Bates’ Fans In Despair Waiting On Renewal Or Cancelation
Lauren Burnham Only Wants ‘Good Vibes’ In Dream Nursery
‘Love Island USA’: Aimee Flores Refuses To Give Her Cookie To Any Man
Who Is ‘Say Yes To The Dress’ Star Randy Fenoli’s Heroic Mom?