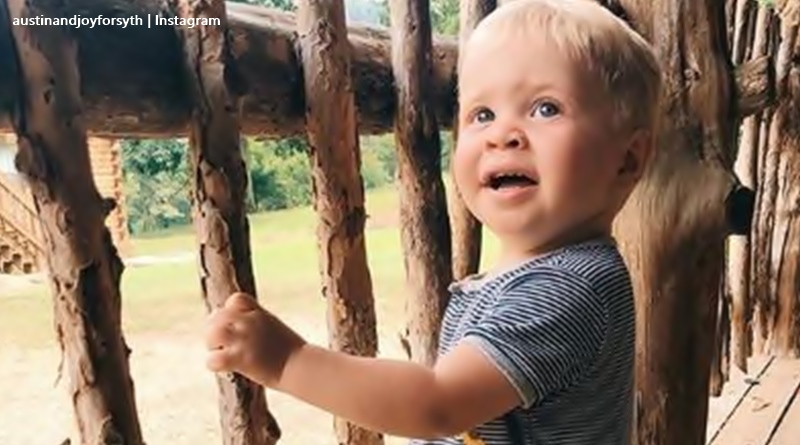 Counting On fans felt so bad for Joy-Anna and Austin Forsyth when they lost their second child in late June. The death of their baby in the womb was revealed during a routine scan. That’s when the shocking news came that her baby was dead. Cousin Amy King shared how terrible it was to see Joy give birth to her dead child. Now, while no doubt the grief is terribly hard to bear, it seems more and more they celebrate their son Gideon.

At one stage, we rarely saw photos of Gideon on Joy and Austin’s Instagram. Not that they hid him away, but certainly he wasn’t on every single post like his cousin Felicity Vuolo. Now, in the wake of their loss, more pictures and vid clips seem to go up. Clearly, they adore their son, Austin’s mini-me. In some kind of way, the newer pictures of Gideon almost scream that they feel so blessed by their little boy. Maybe, it’s all the more precious to them given their sad loss.

On her Instagram, Joy-Anna shared yet another little clip to Counting On fans on her Stories on Friday night. It showed Gideon looking super cute as he wore his tiny cowboy boots. He was out on the wooden deck enjoying “Uncle James’ Mountain Dew.” He really is a little cutie. Previously, she posted a photo of Gideon getting puppy kisses, and she wrote, ” So much love….” A succession of photos shows Gideon with his Grandfathers, Gideon playing with blocks, and enjoying his “happy place” outdoors.

So much love…🐶👶🏼💙 . Gideon wasn’t sure what to think about the puppy’s kisses!😘😂 . #chocolatelab #puppykisses

Between October 2018 and the loss of their baby, (eight months or 32 weeks) Joy_Anna shared a total of 36 photos and videos with Gideon in them. That equates to about one picture of Gideon weekly. Now, since the sad loss, Gideon really features a lot more on the Counting On couple’s posts. Since July 4 when the news broke about the miscarriage, they shared 22 photos or videos in five weeks. That’s not counting the extra Stories we see. So, on average, they now share about 4.5 photos a week.

Of course, fans of the couple love all these pictures of the little Counting On boy. Many of them still bring heartfelt messages of love and support since they lost the baby. Of course, there are the parent-shamers just waiting to pounce and they quickly focused on the little kid drinking soda. However, if you look carefully at the picture above, the bottle of Mountain Dew actually had the cap on.

What do you think about the surge of photos celebrating Joy-Anna and Austin Forsyth’s son Gideon since the miscarriage? Do you think they now have a deeper appreciation for the precious love they have for their son? Or, is it just coincidence that we see more of him these days? Sound off your thoughts in the comments below.