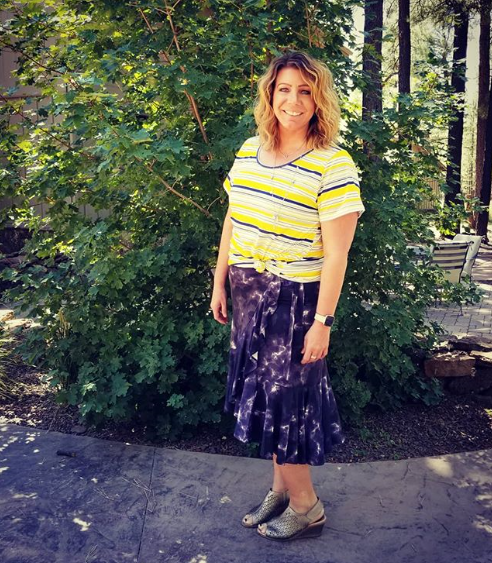 “I’m living MY life for ME, and I’m happy with it,” says Sister Wives star Meri Brown in a recent Instagram post. Rarely out of the tabloids, reality TV star Brown has been under fire for her business venture, LuLaRoe. She certainly has something to be proud of – she attended the coveted LuLaRoe cruise for top sellers earlier this year. It’s unknown how much she makes, but based on reported earnings from other top sellers, it could be as much as six figures a year.

Brown has been open about her business success and often speaks of how much she loves it. “They say if you do what you love, you’ll never work a day in your life,” she shared in another recent Instagram post. Many of her recent posts have been peppered with glowing statements about her LuLaRoe lifestyle, including hashtags like #LivingMyWhy and #LoveWhatIDo. Meri Brown loves this business.

Not everyone likes me. That's ok, I like me. People will criticize my shoes. That's ok, I have foot issues and need to be careful what kind of shoes I wear to not cause too much pain. People will mock my necklace because it's not centered in this photo. That's fine, I just did a little twirl and didn't stop to check that it was straight before this photo was taken. People talk trash about my dark front tooth, that's fine, I had fun as kid and fell and it killed it, but it didn't kill me. People will criticize my choice of outfit because they're not comfortable with pattern mixing, but that's ok, because I am, and I'm the one wearing this and I feel confident. People love to talk trash about my business choices, that's ok, they don't realize the truth because they just "google" their information. That's ok, of all people, I'm one who knows what kind of "information" one gets when "googling" something. The fact of the matter is, I'm living MY life for ME, and I'm happy with it. I'm confident in my choices. I'm happy with what I'm doing. And that's all that matters. 👍👍 #LivingMyWhy #BecauseICan #LoveWhatIDo #LuLaRoeRetailer #SocialRetailer #FlagstaffFashion #LuLaRoeForLife #LuLaRoeMoreThanJustLeggings #LuLaRoeBella #LuLaRoeClassicTee @LuLaRoe @lularoeretailers

Is LuLaRoe a Pyramid Scheme?

On the surface, Brown merely sells brightly patterned, stretchy clothing under the umbrella of LuLaRoe. Accusations of shady business tactics have long been rampant for the LuLaRoe business model. According to the Federal Trade Commission, a pyramid scheme can be defined by one identifiable characteristic. “They promise consumers or investors large profits based primarily on recruiting others to join their program, not based on profits from any real investment or real sale of goods to the public,” says Debra Valentine, Former General Counsel for the FTC. LuLaRoe consultants profit the most by recruiting others to become sellers themselves, not by selling a product.

Success doesn’t come without criticism. Many of Brown’s followers have accused her of promoting a pyramid scheme. “People love to talk trash about my business choices,” says Brown in her Instagram post. “That’s ok, they don’t realize the truth because they just ‘google’ their information.”

On her perfectly imperfect photo, where Brown poses in a yellow striped shirt, blue abstract patterned skirt, and chunky silver shoes, Brown says “People will criticize my choice of outfit, my shoes, my off-center necklace… but that’s ok, because I am, and I’m the one wearing this and I feel confident.”

Followers flocked to the post to praise Brown’s statement. “You’re perfect just the way you are,” said one. “Forget what people think – you are beautiful inside and out,” said another. Others were less kind; “Did you dress in the dark, Meri?” Brown isn’t above responding to negative comments, so we might see another clap back in the near future.

“I’m confident in my choices. I’m happy with what I’m doing. And that’s all that matters,” said Brown, concluding her positive post. Whatever she does next, we can be sure Meri Brown will be disregarding her haters.