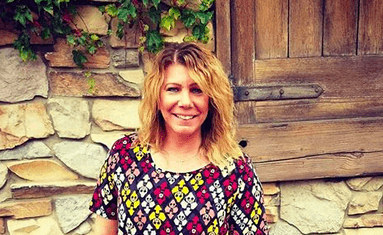 When reality TV stars and other celebrities use social media, they inevitably get some rude or critical comments. Sometimes, stars choose to respond to these comments and they always have a strong comeback. On Sunday, Sister Wives star Meri Brown shared a picture of herself wearing shorts.

In the caption of her recent post, Meri writes, “Happiness is not about getting all you want, it is about enjoying all you have.” From what it looks like, she was just trying to share a happy picture and a positive quote. Of course, things didn’t stay positive in the comment section of her post.

One fan writes, “I didn’t think you were ‘allowed’ to show so much leg. Does this mean [you] finally got away?” The fan was probably referring to the speculation about Meri leaving Kody Brown and her sister wives. Fans have been thinking that Meri will leave Kody, Janelle, Christine, and Robyn behind.

As of right now, this is all speculation. No news of Meri leaving has been shared. Still, the fan seemed to think that Meri’s shorts are an indicator of her “getting away” from the rest of her Sister Wives family.

If you’re a fan of the TLC show, you probably know that Meri wearing shorts shouldn’t necessarily be a problem. In response to the fan’s odd comment, Meri writes, “I’m ‘allowed’ to do whatever I want.” Because she is in a polygamist family doesn’t mean she is forced to do things her husband says.

Right away, other fans decided to come to Meri’s defense too. One fan commented, “She’s NOT amish.”  Another said, “allowed ? Have u see the show …these women r not told what to do !! Strong women !!!” Then, someone replied to the first fan’s comment and said, “You shouldn’t be ALLOWED to post before thinking.”

Most of the fans seem to think it’s ridiculous that Meri wearing shorts has a connection to her leaving the family. This is especially true because there has not been any official news on her leaving. It’s all speculation at this point.

Some fans chose to encourage Meri on her positive social media post. Someone said, “Keep doin’ you Meri. You look great & you look happy. I love it.” The rest of the comments are full of compliments about Meri and her cute outfit.

What do you think of the fan’s comment on Meri’s post and her clap back? Do you think that Meri will be leaving Kody and the sister wives? Let us know in the comments below!

A new season of Sister Wives is being filmed. So far, TLC hasn’t shared when it will air.