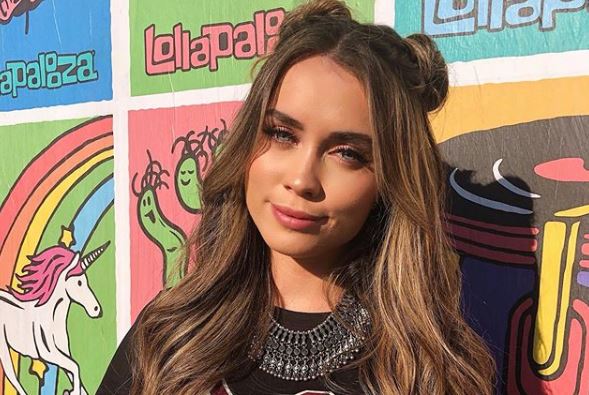 25-year-old Caitlin Clemmens arrived in Bachelor in Paradise last night and used her date card on bad boy Blake Horstmann. She wasn’t the least bit fazed when Blake confessed to everything he had done with all the other ladies. Blake did mention in a later confessional interview that aired on last night’s episode that he had also met Caitlin at Stagecoach. He didn’t make their encounter seem like much, but Blake’s been pretty secretive on this show.

It wouldn’t be 100-percent shocking if something did happen between them at the music-festival-turned-official-Bachelor-reunion. By the end of their date in Paradise, the two of them were making out in the pool, which is what Bachelor in Paradise is supposed to be all about. There haven’t been nearly enough hot tub scenes this season.

Bachelor in Paradise star Caitlin has dated Bachelor stars before

In case you need a refresher, Caitlin has previously been linked to several other Bachelor stars.

Caitlin’s debut into Bachelor Nation was during Season 23 of The Bachelor — Colton Underwood’s season. When she got out of the limo on the opening night, she handed notorious virgin Colton a red balloon, popped it, and then said she wanted to be the one who popped his cherry. She didn’t get much screen time on the show, as Colton eliminated her during week three. Colton actually sent Caitlin home at the after party of a group date — rather than waiting for a rose ceremony. He didn’t find a connection with her.

Tonight’s the night!🌹✨Things are about to pop off! 🎈Tune in to ABC at 8pm!

After filming The Bachelor in 2019, Caitlin was linked to Chad Johnson which TV Shows Ace reported on. Chad claimed they started seeing each other after that he slid into Caitlin’s DMs. She was hesitant about going public with the romance because of Chad’s villainous reputation in the Bachelor world. Two months later, when he accused her of cheating on him while they were out at a club, Caitlin clapped back and said she was never even in a committed relationship with Chad.

“I tried to remain very respectful while shutting down dating allegations by simply stating that we were not dating and I had no plans to date him. It seems as though that respect is not reciprocated,” she told Us Weekly. “In no way did our shared time constitute a committed relationship and that is why I attempted to respectfully shut down those rumors.” (Chad later admitted that they “weren’t boyfriend and girlfriend,” but that they were “talking.”)

According to Women’s Health, last night’s coming attractions of BIP show “Caitlin acting territorial and jealous over Kristina’s relationship with Blake, so fans can expect that this love octagon(?) will probably only get more complicated. Also, Blake is involved, so you know it’s going to get messy.”

Do you remember Caitlin from Colton’s season? Why does she seem to go after all the bad guys of Bachelor Nation? Would you like to see her in a relationship with Blake or anyone on Bachelor in Paradise this season? Share your thoughts in the comments.