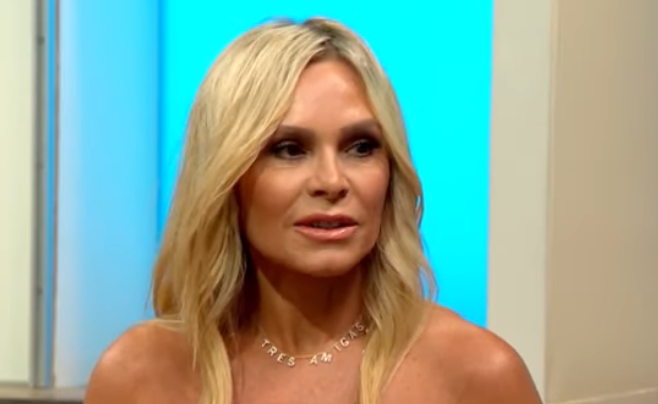 Somehow Tamra Judge finds herself in the middle of her son Ryan’s custody battle. When Ryan went to pick up his daughter there were four police officers waiting for him.

On her Instagram Ryan Vieth’s ex, Sarah Rodriguez stated the reality star ambushed her. She posted, “So I just got ambushed by Tamra and her mom at my door. She recorded me without my knowledge… now she is going to take me to court to get Ava taken away from me.” The post has since been deleted, but Reality Blurb has the screenshots.

Bye NYC back to OC

What Does Tamra Judge Have To Say About Sarah’s Accusations?

Tamra Judge only cares about her sweet granddaughter, Ava. In a post on Instagram, she said, “My son and his ex have created a public circus. I’m absolutely disgusted and my only concern is Ava. Not my circus not my monkeys.” That post has since been removed from her Instagram.

According to a post on Too Fab, a fan responded to her disgust with some of their own. The fan posted Ryan was crazy and suggested Tamra stay out of it, she responded. The RHOC star said, “you don’t know that. No one knows the truth but us. They are both idiots for making this public.” Of course, Tamra is going to defend her son but even she thinks the whole thing is stupid.

The Circus That Revolves Around Ryan, Sarah, And Little Ava

Ryan who said he was leaving RHOC to keep his privacy live-streamed trying to pick up his daughter. Sarah had shared the texts she previously leaked with them and they told him they wouldn’t force his daughter to go with him. In the clip, you can see Sarah saying Ava wants to stay with her. Later she posted a clip holding a court order with times Ryan was supposed to see his daughter. She stated it wasn’t his time. Tamra Judge had previously said Sarah posts all kinds of things and deletes them so she doesn’t put much stock in her posts.

Ryan said she knows the schedule. Those were from an old court order when he worked a lot more. The baby was small and he didn’t want to wake her up. He said it’s been the same for years and she’s just angry he said she had affairs. The two have been engaged in a social media war of words and it seems to just keep escalating. Tamra Judge has responded to people who criticize her son by saying, “the truth will come out. You’ll all know it soon enough.”