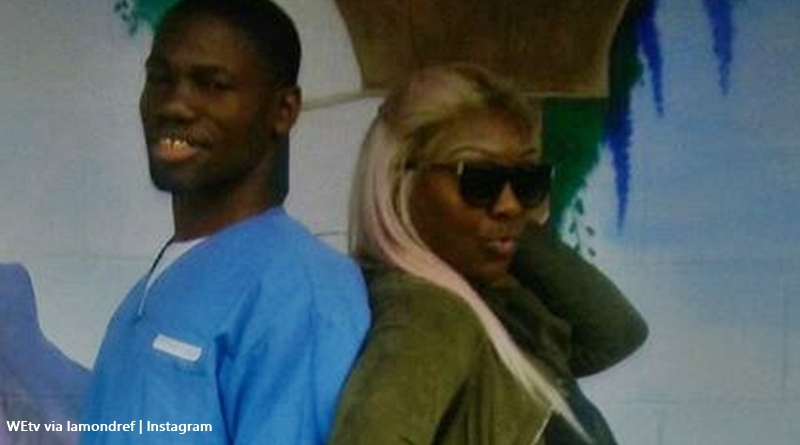 Love After Lockup returned on Friday to WEtv. Of course, we can expect all the usual drama and among the couples, we see Andrea and Lamondre.  In total, Heavy notes that in “The season 2 return…they “feature seven couples: Glorietta and Alex, Lizzy and Daniel, Andrea and Lamondre, Lacey and John, Cheryl and Josh, and Vincent and Amber.” Plus we see returnees from season 1, Angela and Tony. Andrea and Lamondre may have more in common than their bios stated. As Starcasm points out, they both know the inside of jail cells.

The backstory to Andrea and Lamondre turns out to be one that looks fairly simple at first glance. They know of each other from Daytona Beach via friends. When he got jailed for trafficking drugs, he wrote to her from prison. They ended up engaged and plan to marry when he gets out. Meanwhile, she stresses her family simply don’t like the idea of that as he’s got a bad reputation.

However, here’s where the Love After Lockup backstory unravels a bit. It looks like Andrea’s no Ms. Innocent. While she’s described as an “entrepreneur,” who happens to own an IKlass Sunwear place, she got done for eyewear theft. Starcasm super-sleuths reveal the juicy details. And, it looks like she and Lamondre both know the inside of jail cells pretty well.

The inside of jail cells pertains to both these people

Digging around, Starcasm unearthed the fact that Andrea’s not unfamiliar with the inside of a jail. In fact, either her family worry Lamondre may lead her astray again, or they just act shocked abut her man’s background. That’s because she’s toted up a rather large bag of mugshots herself. Their article notes that in 2014 “she and her accomplices were caught stealing $6,695 worth of eye wear from a Florida Sunglass Hut!”

And that’s not her only time in police custody. Sarcasm lists a total of 22 “criminal charges” since 2001. These range from battery through to retail theft, grand theft, and “public assistance fraud.” There’s also a number of driving-related and false ID offenses. Love After Lockup on Twitter suggests that Andreas could “find a better man.” Well, now it looks likes he could maybe find a better woman.

Who thinks Andrea can find a better man? 🙋 #LoveAfterLockup pic.twitter.com/yUJnuRPGoo

Over on Twitter, @kelz3108 posted up a comment about Lamondre and Andrea. They wrote, “everyone is hating on@LamondreF and saying Andrea shouldn’t date an inmate, but come on, dude is behind bars and STILL providing. He’s not using her for money & he’s sweet. I can’t even say that about most dudes on the outside.”

However, many Love After Lockup fans already caught on that she racked up a number of her own crimes. Maybe this couple really suits each other better than we thought at first glance. What do you think about the fact that Andrea’s no stranger to life behind the bars of a jail cell? Certainly, Lamondre and Andrea share a common experience and that could be the bond that holds them together. Sound off your thoughts in the comments below.

‘Manifest’ Season 1 & 2 Drop Into The Netflix Library
Is Jessa Duggar Finally Going To Reveal Baby No. 4’s Gender?
Kendall Jenner Flaunts Plump Booty In Barely-There Bikini Bottoms
Does Colton Underwood Have A Boyfriend? (No, Not The Plant)
Pucker Up! Amelia Hamlin Bares An Uncanny Resemblance To Lisa Rinna