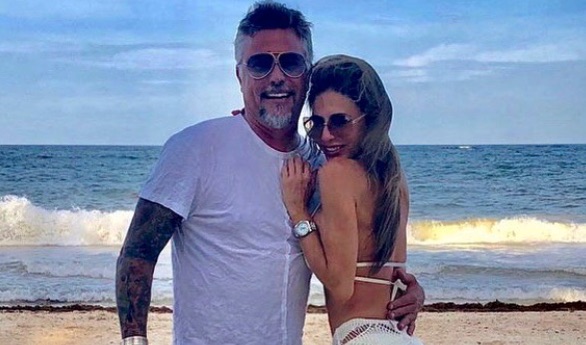 On Saturday, Fast N’ Loud star Richard Rawlings announced his engagement to Katerina Deason. The owner of Gas Monkey Garage took his love to their favorite vacation spot in Tulum, Mexico. There, he went on bended knee and asked her to be his bride. This is what we know now.

I watched these moments happen in movies, read about them in books, but never really thought it would happen to me. But, God and my Mom in heaven worked overtime to bless me with a beautiful, kind, loving man who has kept me smiling since our first date. I love you Richard with all my heart and I promise to live every day trying to make you as happy as you have made me. ❤️

Gas Monkey Garage owner Richard Rawlings is engaged to be married! On Saturday, the star of Fast N’ Loud posted photos of his romantic proposal at the Be Tulum resort in Quintano Roo, Mexico. His bride is the lovely Katerina Deason.

Fans may remember that back in April, Richard offered to “step up” and take Charlize Theron out for a ride. It didn’t sound like the Academy Award winner took him up on that offer. Instead, Richard seemed to find real love and his “soulmate” Katerina. He was happy to share his love to the world.

Richard Rawlings posted a very poetic tribute to his stunning new fiancée Katerina. He shared a photo of himself dressed in denim capris on bended knee, with rose petals strewn around the sand. He held a ring in his hand. The astonished Katerina was standing, her hands in front of her face, trying to hold back tears. She looked like someone out of a romance novel, in a dramatic red halter dress. Accompanying this romantic photo, he wrote how she was his soulmate and best friend.

“The very second I laid eyes on you I knew…..
Then only seconds later I realized your unbelievable beauty and grace came from within…..
Right then I decided I wanted to spend all my seconds with you…
Katerina you are my everything and I promise to make the rest of our lives full of love and laughter. …
You truly are my best friend and soulmate…..
May God guide us through the rest of our lives as ONE…..
I love you with all that I am.
R”

Needless to say, she said “yes!”

Katerina Shares Her Love For Richard

Katerina had some wonderfully romantic words for her new fiancé, Richard Rawlings. “I watched these moments happen in movies, read about them in books, but never really thought it would happen to me. But, God and my Mom in heaven worked overtime to bless me with a beautiful, kind, loving man who has kept me smiling since our first date. I love you Richard with all my heart and I promise to live every day trying to make you as happy as you have made me. ❤️”

Richard’s sister Daphne Rawlings Kaminski, who Fast N’ Loud fans know as the money wrangler on the show, gave a seal of approval for her future sister-in-law. Daphne responded to Katerina’s post with a sweet statement: “Kat, our family is blessed to welcome an angel such as you!”

Daphne posted this from Tulum, where it is clear that Richard and Katerina were not alone on this romantic getaway. Sounds like it was a Rawlings family vacation with Daphne and her husband, Ken Kaminski, along for the trip.

This will be Richard’s fourth wedding, but only third marriage. His first wife was Karen Grames. They were together for a year in the mid-1990s, their relationship ending in 1994. Then Richard married Suzanne Marie Mergele in 1999. That marriage lasted until 2009. They somehow reunited and remarried in 2015, but they were officially divorced in May of this year.

Richard, who recently turned 50, is ready to do the marriage thing again, and it seems that he has found the woman of his dreams. Congratulations to Richard and Katerina! No word on when the wedding will be, but we will be sure to cover it.

Be sure to check back with TV Shows Ace on the latest news on Richard Rawlings and Gas Monkey. Fast N’ Loud airs on Mondays on Discovery.

‘RHOBH’: Erika Jayne’s Estranged Husband Tom Girardi Reportedly Living In A Senior Center
Kanye West Wasn’t As Committed To Kim Kardashian As She Is To Him
‘B&B’ Weekly Spoilers: Quinn & Carter On Again, Steffy & Finn Get Closer
Separation Over, Isabel & Jacob Roloff Back Together
‘LPBW’: Are Molly & Joel Silvius Closest To Jacob And Isabel Roloff?