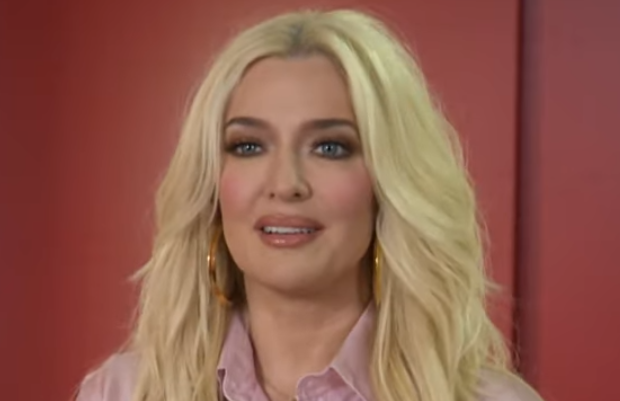 Erika Jayne says, “what’s more Beverly Hills than Tori Spelling?” Fans agree that’s true, but Spelling is someone who doesn’t hide things like financial troubles which could turn the producers off.

Tori has mentioned it a lot so now it’s out there. Everyone knows she wants to be on the show now. Erika Jayne weighed in on what she thought of Spelling potentially joining the cast and her fashion budget among other things.

Would Erika Jayne Be Down With Tori Spelling As A Cast Mate?

Jayne says she would be down for Tori to join the show, but she said sometimes you think you’ll get along with someone and you don’t. An article on Reality Tea said Tori Spelling has an in since Denise Richards is part of the 90210 reboot. Fans have been asking for a cast shakeup on Real Housewives of Beverly Hills, but producers aren’t sure Tori would be the new wife they’re looking for.

While Tori talks running out of money, Erika Jayne says she spends around forty grand a month to look good. She says she thinks that’s low and it’s the cost of doing business. “You get to speak through your hair, makeup and wardrobe. I’m communicating through costume,” she stated according to Reality Blurb. It’s a part of her career. Her husband has been accused of taking out a loan to fund his lifestyle. She said there’s no way she’s talking about it and she didn’t care what people were going to say about that.

That Peugeot gave me anxiety BUT we had a fabulous day driving around and truffle hunting. Thelma and Louise x The French Connection . The lost files…. @lisarinna

Would She Make A Move To A Different Real Housewives?

The topic of switching shows and moving if she had to came up. They wanted to know which housewives she’d join. She said she’d go back home to Atlanta and she’s friends with Kenya Moore. It would be interesting to see Erika in a different element around the ladies of Atlanta.  She said she’s met all of them and they’re very sweet. Erika Jayne has broken free of being a stay at home wife and has branched out. She went on tour as a musician and had roles of soap operas and Law and Order.

Erika clearly isn’t afraid to spend money to look good. She said it’s expensive to be a public figure and others will agree with her. She said she also liked to have some makeup-free days. “You protect your energy, learn how to spend it and how to conserve it; save it for those who matter most to you,” the reality star said.