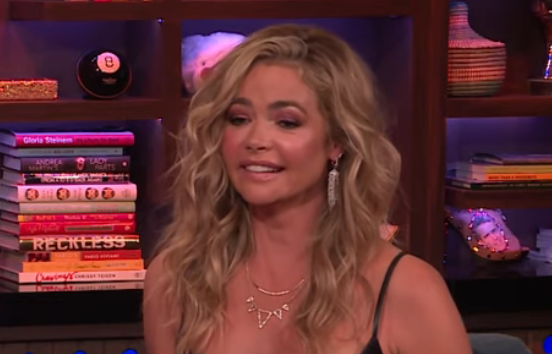 Denise Richards mentioned on RHOBH that Charlie Sheen brought a hooker to Thanksgiving dinner. She talked about that incident including her dad’s reaction and much more on Daddy Issues. The podcast is hosted by Dean McDermott, Adam Hunter, and Nicky Paris. When asked about the incident she was happy to talk a little more about it.

Charlie had shown up to the dinner with his lady of the night in tow. He’d made her sit in the car, but Denise being the tender heart she is felt bad she’d been left in the car. According to the recap of the podcast on Too Fab, she invited her in to sit with them. Her dad sat next to her and tried to engage her in conversation. Denise Richards said her father told her, “I think there’s something not right with that woman, I keep trying to talk to her and she says nothing.”

Happy belated birthday to our assistant and friend and brother… I’m a day late. But you know how much we ❤️ u @the_mikey_ryan

What Did Denise Richards Say About Finding Work After Her Divorce?

Denise told him, “she’s a hooker, don’t ask her any questions.” When he realized she was a hooker, he told her it was nice of her to invite Charlie’s prostitute in for dinner. When it came to Charlie, she said it was tough after the divorce. She didn’t get as many acting jobs and had to work really hard to get back on top. Being in the tabloids all the time was rough on her.

The subject turned to getting down with your partner and Dean mentioned Tori Spelling and he used CBD lube. Denise said she wasn’t into THC. She said she doesn’t smoke marijuana, “she’s tried it twice in her life.” She also said she’d seen cocaine but never done it. Dean wasn’t afraid to ask the naughty questions. He wanted to know about Denise’s sex life. She said they do it every day. Denise Richards said, “we’re never too tired for it. I think it’s important to be very connected and especially after you have kids too. Mom and dad have to stay intact.”

Since they were talking about Spelling the subject came up that she wanted to be on RHOBH. Denise who is on BH90210 with Tori said, “I think she would be so great on the show.” Tori and Dean had a reality show once so she would be familiar with how it went. Denise also said of her E reality show It’s Complicated, she needed to do it because Charlie was trying to bleed her dry with the divorce.

Make sure you don’t miss new episodes of The Real Housewives of Beverly Hills when it returns.