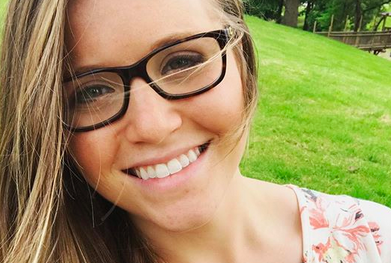 Joy-Anna Duggar and her husband Austin Forsyth appear on TLC’s Counting On. The show features members of the Duggar family as they have grown up and started their own families. Currently, Joy-Anna and Austin are the proud parents of one son, Gideon.

In early July, Joy-Anna and Austin shared a post on their joint Instagram account. They shared that they had tragically lost their second child, a baby girl, at 20 weeks gestation. During this hard time, they relied on their family, friends, and fans for prayers and support.

Though Joy-Anna and Austin are still grieving, they are celebrating Gideon and how much joy he brings them. They share regular posts about the toddler and what he’s been up to.

On Instagram on Monday, Joy-Anna posted two pictures of Gideon sitting in a pickup truck. He has his hands on the steering wheel and has a huge smile on his face. Maybe the little guy thinks he’s a big boy and that he’s actually driving.

The caption of the photo reads, “Just 12&1/2 years til he’ll be driving this truck. Time is flying by way too fast!#littlemanbigtruck #enjoyeverymoment #GideonMartynForsyth”.

. Just 12&1/2 years til he’ll be driving this truck.🤯 Time is flying by way too fast! 🕰😭 . . #littlemanbigtruck #enjoyeverymoment #GideonMartynForsyth

Counting On fans leave comments on the new photos

On social media, Counting On fans love to see updates about Joy-Anna, Austin, and Gideon. In the comments section, they always have plenty to say about the posts.

In the comments section on this recent post, fans shared that they were confused about something that Joy-Anna mentioned in her caption. One part of the caption reads, “Just 12&1/2 years til he’ll be driving this truck.”

Fans were confused because many states require drivers to be 15 to get their learner’s permit and 16 to get their driver’s license. With Gideon only being one-and-a-half years old, fans thought that Joy-Anna’s caption was unclear. One asked, “12 & 1/2 years?? Is gideon 3 & 1/2?”

In response to a fan’s comment asking about the legal driving age in Arkansas, Joy-Anna explained, “You can get your permit at 14 here in Arkansas!”

In addition to the confused comments that fans left, many fans are loving the new pictures of Gideon. One fan suggested, “You have to recreate that photo and do a side by side”.

Here are some of the comments from Counting On fans:

What do you think of the cute new pictures of Gideon? Leave a comment below!