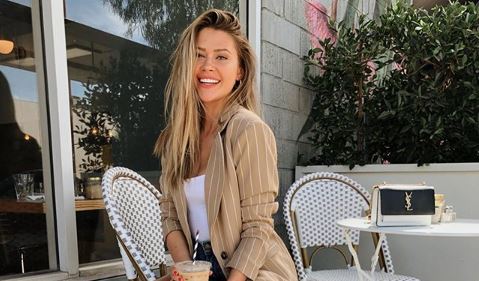 Only two episodes into Bachelor in Paradise and already there’s so much drama to discuss. Instead of a Mexican Paradise, it has turned into Bachelor in Purgatory for Blake Hortsmann. Coming off of the “Luke P” Bachelorette Season, many viewers are afraid this season is turned into the “Blake Show.” Caelynn Miller-Keyes gave him a wrap that made him look worse than Robbie Hayes, Josh Murray, Dean, as well as Luke P and Jed, all rolled into one. Thanks to the Stagedoor Music Festival attended by several of the franchise’s personalities, Bachelor in Paradise has turned into a soap opera scenario that is too cringe-worthy to actually be reality.

Blake reveals what is going on

Blake cleared up the misrepresented situation by posting since-deleted texts between him and Caelynn the night they hooked up. Reality Steve, as well as our blog, still have the full scoop on their correspondence.
The other contestants, as well as everyone in Bachelor Nation, have all taken sides. It’s good to have friends in your corner and real friends are identified in times of trouble.

Jason Tartick has defended his friend Blake who he appeared on Becca’s season of The Bachelorette:

“Through the good, bad and ugly you’ve always been a loyal friend to me, and I will always be a loyal friend to you…These are the trying times in which you’ll learn invaluable life lessons that will allow you to be in a better position in your life pursuit of love and happiness. A disappointing time, but know I’m here for you and I do believe there are two sides to every story.”

Bachelor in Paradise Season 5 couple Astrid and Kevin showered Blake with love in the comments of his Instagram post:

“I know I told you last week posting these might not be the best idea. but as a friend I just want YOU to be happy and I know your anxiety was about to erupt. So I get it. And I’ll support you regardless. because I know you’re a good friend and a good hearted human. Chin up amigo.”

Even bad-boy Chad needed to express his thoughts via Twitter: 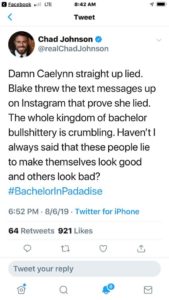 Meanwhile, Dean Unglert is voicing his undying love for Caelynn:

“A ‘public figure’ sharing private text messages in an attempt to salvage whatever is left of their fragile ego….Calling it childish would be disrespectful to children everywhere.”

Dean and Caelynn are rumored to have started dating since before she even arrived on Bachelor in Paradise. It seems as if producers manipulated Caelynn to come onto BIP to stir the pot and start major drama and love-scorned triangles for Blake. Did she even need to appear on the show if she and Dean were already together? Also, why is Blake on BIP? He doesn’t have any issues meeting females who swoon head over heels for him. Does he really have any intention of leaving BIP in a committed relationship?

“Blake needed to be called out & Caelynn & Kristina should NOT have kept his ‘secret’ to protect his image on TV! BUT I don’t see the point in using Kristina using her date card for this..I wish she would have asked someone worthy & called him out on the beach #BachelorInParadise.”

Amanda also seized the opportunity to throw shade at her own BIP ex Robby Hayes who posted alleged emails between the pair following their 2018 split.

“He should ask Robby Hayes for some insight before he does … see how it turned out for him,” Amanda replied to Dean’s tweet about the situation.

You can read more people’s thoughts on the situation summarized here including Kristina, Demi, Adam, Chase, Ashley Spivey and Tanner.

Being a loyal friend seems to be the only reason Annaliese returned to BIP.

Loyalty also seems to be something Nick Viall is concerned with now. Keep in mind, he did announce on national television that he had sex with Andy Dorfman and Kaitlyn during both of their seasons. 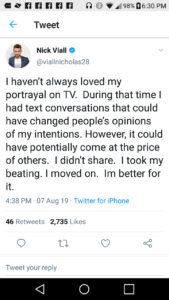 Fours hours into this season of BIP and there still hasn’t been a rose ceremony yet. The men are expected to hand out the roses on next Monday’s episode. Who do you predict will be heading home? Is there any romance you are excited to see develop?

Hannah G has come out of her shell and become the latest kissing bandit. Maybe she thinks this is her chance as Hannah the Bachelorette and it’s her duty to get to know every male contestant.

Due to the immediacy of social media, the public is learning post-season stuff even before watching each episode. For example, Cam and Kirpa are being public about dating in real life away from BIP.