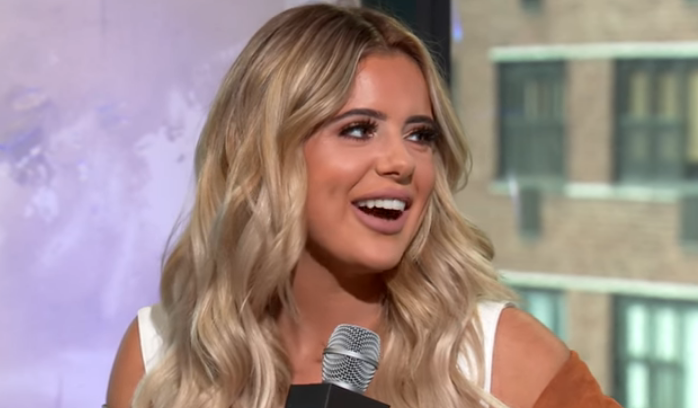 Brielle Biermann from Don’t Be Tardy went to the wedding of Tana Mongeua and Jake Paul. She didn’t come alone, she brought a mystery man with her. On her Instagram, she posted a picture with the caption, “wedding of the century.” Now everyone wants to know who this guy was that she had on her arm.

The two Youtube stars had a very public ceremony surrounded by cameras. They made sure to live stream it in true influencer fashion. There is a bit of controversy surrounding the wedding because they hadn’t filed for a marriage license according to People.

The end of the ceremony resulted in a fight after someone threw a drink onto the newly married couple. It couldn’t have ended peacefully if Jake Paul was involved.

Fans of Brielle were more interested in her mystery arm candy.

My dress is not white.

How Did Brielle Biermann Act With The Mystery Wedding Date?

Brielle Biermann had been photographed with her hand on her date’s waist. The man wore a blush blazer and shiny loafers. Biermann looked amazing with a fitted white silk dress and gold heels. The off the shoulder dress was right on style for the twenty-two-year-old reality star.

Towards the end of last year, Biermann had reconciled briefly with her off and on-again boyfriend Slade Osbourne. In June, however, she posted to Instagram that she was now on the dating app Tinder. According to US Weekly, the door probably isn’t closed for the two in the future. Brielle said, “I knew he wanted to get back with me, Like, I knew that if the opportunity was there he’d probably consider it. And I would too, because he was my first love and the only person I’ve ever really loved. We ended on great terms. He’s still a part of my life, and we’re like best friends.”

At the beginning of July, her ex-boyfriend of two years got engaged to Riverdale’s Vanessa Morgan. In February, the reality star said she was, “not looking for a relationship, but was dating.” She said she just wanted to, “focus on herself and what she wanted out of life.” The star said it was time to be single because she’d been in relationships since she was fourteen. Now fans just have to figure out who this new tall, dark, and handsome suitor is and if it’s a serious relationship or not. It did make it onto her Instagram, so time will tell.

Make sure you don’t miss Don’t Be Tardy when it returns to Bravo with new episodes. The family just took a huge road trip with the camera crew along for the ride.