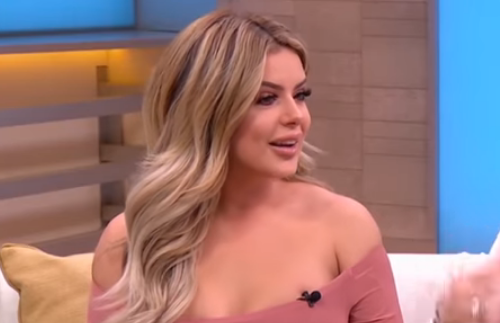 Brielle Biermann is living the high life after getting a raise from Bravo. Along with her mother Real Housewives of Atlanta alum, Kim Zolciak, the star received a big raise to continue their reality show.

On an article posted by Radar Online the ratings killed it. The debut of the seventh season garnered a raise for the stars and they are thrilled. Don’t Be Tardy initially followed Kim Zolciak and her wedding to Kroy Biermann, Atlanta Falcons player. Now it follows all the family as they go through their day to day. Because of this show, Brielle is making a killing.

Brielle Biermann Celebrates Getting A Raise With Friends

Brielle started the night by going to the West Hollywood club Delilah with her teenage sister Ariana. Following that she met up with Scarlet and Sistine Stallone. Finally, she left to keep the party going. Brielle has gotten a raise to up to $8,000 an episode for season eight. Her mother also got a raise and will be making over a million for the new season.

According to the Inquisitr, Brielle started to make $7500 an episode after she turned eighteen. She’s now making way more than that so a little time on the town isn’t going to hurt her wallet one bit.

Could She Have Been Also Partying To Avoid Thinking About Her Ex?

Brielle Biermann could have been partying to avoid thinking about her ex, Michael Kopech.  The Chicago White Sox player got engaged to his girlfriend, Vanessa Morgan. Morgan plays Toni Topaz on the popular hit television show Riverdale.  The marriage proposal took place at the Grand Canyon under a waterfall. Michael had friends film it and uploaded it to Instagram.

On a Bravo TV interview in February, Brielle explained why they broke up. She stated he, “wanted to take a break and wanted her to wait on him.” She said no to waiting and they called it quits for good after two years of dating. Because of this, their relationship was over and he moved on to someone new.

It seems fast that Michael is already engaged, sources say Brielle doesn’t seem bothered by it. While she went out with her girls and not a date, she happily partied the night away with them. The eighth season of Don’t Be Tardy will follow Brielle’s love life, so hopefully, she will meet the one for her.