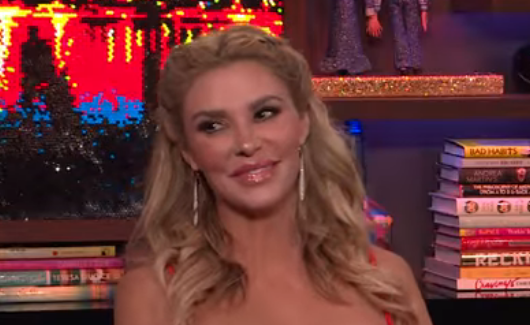 Brandi Glanville has reported she will not be replacing Lisa Vanderpump on RHOBH and she’s hurt. According to Hollywood Life, the reason the producers can’t bring her back is the main reason she’s upset.

On her podcast, Brandi Glanville Unfiltered, she let her fans know the reason she would not be coming back. She wasn’t shy about sharing her conversation with a producer of RHOBH.

Why Will Brandi Glanville Not Be Returning To Real Housewives Of Beverly Hills?

She said the producers at Bravo are refusing to have her replace Vanderpump because of their loyalty to Lisa. She said this upset her because they’d been talking about her coming back for a couple of seasons. Brandi Glanville said, “she wanted to make sure that I’m not back.”

Glanville also said Kyle Richards was going to be a guest star on the podcast but she had canceled. The host said Bravo doesn’t, “want any Housewives doing press right now because of fans anger over PuppyGate.”

Brandi had been a full-time housewife from 2011 to 2016 and returned as a guest for the sixth and ninth season. She said the reason they don’t want them doing press is that they haven’t figured out who will be joining the show.

Blondes do have more fun! Thank you so much @drvictoriadds for perfecting my chipped tooth! Kitty Kats you can hit her up both in LA & NYC #smile 😃😃💗💗💗💗

How Does She Feel About Lisa Vanderpump Quitting The Show?

Brandi Glanville says even though LVP says she’s done with the show, she doesn’t think her days are over. She states, “she’ll come back. Whoever the weakest link is, she’ll get in with them and they’ll make up. She’ll blackmail someone and get back in.”

These are some pretty strong accusations and it will be interesting to see if LVP really does return. Glanville also said Camille Grammer coming to the Season 9 reunion was set up by Lisa. She says she sent her in with a script she wrote. She stated, “I think she just wanted to leave the door open with the other women so she can come back and blame me for everyone calling her out on her bullshit.”

Too Fab had reported Glanville had been pleased with everyone turning against Lisa. She said Vanderpump is the reason she got kicked off in the first place. She stated, “she’s a manipulative person and she did a lot of her dirty work for her, but finally called her out on it.”

In response to this according to Hollywood Life, Lisa Vanderpump thinks Brandi Glanville should return to RHOBH.

She tweeted in response to a fan about the podcast, “First, Camille Grammar speaks for herself. Secondly, I don’t give a damn if Brandi joins RHOBH. In fact, I think she should join this cast, as she would fit in perfectly.” All fans can say about that is, “burn!” There’s no way this feud is dying anytime soon.

Don’t miss The Real Housewives of Beverly Hills when it returns to Bravo.