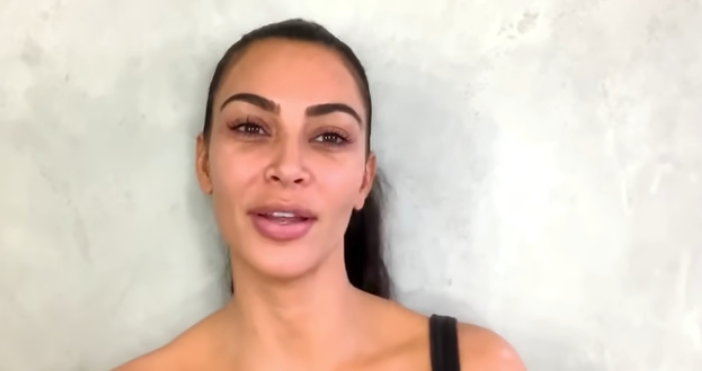 Kim Kardashian West is no stranger to haters. People have criticized everything from her body to her relationships. Now according to an article on Allure, people are criticizing her line of body foundation from KKW.

An article on Bustle, says the brand has had its share of critics. Some people weren’t happy with the shades available and others complained it wasn’t restocked enough. Kardashian takes it all in stride.

Kim had a very public doctor’s visit on Keeping Up With The Kardashians after red splotches showed up on her skin. She said, “some days I feel great and some days I just don’t want the distraction.” It gives her something real to connect with her fans, she’s not always perfect.

How Does The Foundation Work For People With Skin Conditions?

Kim Kardashian West wanted to create something those who suffered from skin conditions would be able to use. There are many who are saying they love it. They enjoy the skin smoothing they get from it and being able to cover up their skin issues.

Others have said it is an unnecessary product and they don’t like the message it sends. Kardashian thinks some people are fine with their skin no matter the condition and will proudly wear it without covering up. She knows some people aren’t comfortable yet and she wants them to have the option. That’s why she stands behind her product.

The reality star says she’s gotten many messages from people saying what a positive change it’s made in their lives.

What Are People Saying About The Body Foundation?

Lots of people are voicing their opinion on Twitter whether it’s good or bad. Here are just a few of their comments.

One Twitter user with Petechia said, “thank you! I don’t have to hide my arms and legs now.” Another said she had been trying to get rid of eczema before she got married. She said, “I can’t believe how well this hides my eczema and it doesn’t irritate.”

One Twitter user wasn’t as impressed, “I can’t be bothered to put makeup on my face most of the time. yet alone my arms, legs, and stomach.”

Kim Kardashian West says she’s never seen her body makeup as a necessity every day, it’s not needed to survive. It’s just nice to have the option. There’s no doubt the foundation is really making a difference despite the naysayers.

Make sure you don’t miss Keeping Up With the Kardashians when it returns to E! with new episodes on Sunday nights.

‘Bringing Up Bates’ Fans Worry About Josie’s Baby, Wonder What’s Wrong
‘You, Me, And My Ex’: Kayee & Jerry’s Race to Relationship
‘Autopsy: The Last Hours Of Dean Martin’ Where To Watch, What To Expect
Savannah Chrisley Gets Scolded By Fan For Wearing Barely Nothing?
Justin McSwain Says He’s Thankful For A Year Of Life – Interesting Photo