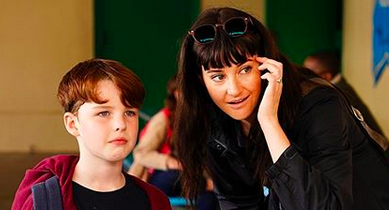 The finale of Season 2 Big Little Lies airs on HBO on Sunday, July 21. Fans are speculating about what could happen in the finale. There are plenty of loose ends to be tied up in just a one-hour long episode.

In an appearance on Jimmy Kimmel Live on Monday, Shailene Woodley shared a spoiler about the season finale. Woodley plays the role of Jane Chapman in the HBO hit TV show.

On the show, Woodley explained how HBO didn’t want her to give too many details away. She was allowed to share “a little bit of a nugget” though. During the show, the Big Little Lies star said, “In the beginning of the next episode, it’s a little bit of a cliffhanger, but all of the women go to visit Perry’s grave and his body’s missing.”

Now, this sounds like more than just “a little bit of a nugget”. This is a huge bombshell that fans weren’t expecting to hear.

There are a handful of reasons that Perry’s body could be missing. Some fans have been speculating that Perry is still alive. It’s also possible that Mary Louise dug up his body for some weird reason. This could have been a part of the investigation into his death as well. No matter why Perry’s body is missing, this is going to be a busy episode.

Will there be a third season of Big Little Lies?

According to HBO, it’s not likely that there will be a third season of the show. After the first season, fans were surprised with a second season that wasn’t supposed to happen either.

we have to stick together

The president of HBO, Casey Bloys, spoke with TV Line about the possibility of a third season. He said, “I love this group of people – I would do anything with them. But the reality is, they are some of the busiest actresses working in Hollywood. We have deals with some of them — Nicole [Kidman] is doing her next show with us. I just think it’s not realistic.”

Then, he continued, “Look, if they all came to me and said, ‘We worked out all of our schedules!’ – then sure. But I just don’t think it’s realistic.”

With no third season and the opening that Woodley described, we are in for a jam-packed season finale on Sunday. There is a lot to fit into a single episode. From what we’ve heard, the season’s end gives fans the closure they want.

Will you be watching the final episode of Big Little Lies? What do you think will happen in the Season 2 finale? Leave a comment below!

Update: She later came back and said she lied about the spoiler.