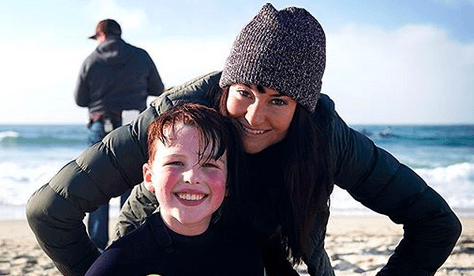 In the final minutes of Season 2 Episode 5 of HBO‘s Big Little Lies, fans were hit with a huge surprise. Corey Brockfield, who is Jane Chapman’s love interest, is seen leaving the police station. As of right now, fans don’t know why he is there. Of course, plenty of us are already speculating.

In those closing moments of the episode titled “Kill Me”, Bonnie Carlson is seen pulling up to the police station. Fans are assuming she is going to turn herself in after pushing Perry Wright down the stairs to his death.

When Bonnie gets out of her car, Corey is leaving the police station. He walks out with a police officer before they go their separate ways. As Corey gets into his car, he and Bonnie make eye contact.

This is all a mystery to fans. All we really know about Corey is that he’s dating Jane. We haven’t seen a lot from his character, especially because he wasn’t a part of Season 1 of Big Little Lies.

Why could Corey from Big Little Lies be at the police station?

So far, fans are purely speculating about Corey’s trip to the police station. There are many different possibilities here. One stands out as being the most likely though.

Fans think it’s possible that Corey was hired as an undercover cop. He could have been hired by anyone. Of course, Mary Louise Wright is a strong contender here. Obviously, Mary Louise is very interested in solving this crime and will go to any lengths to do it.

Any of the investigators could have been involved as well. Jane’s new co-worker could have been hired to become her love interest and get more information about Perry’s death.

In one scene early on in Season 2, he approaches Jane on the beach before he goes surfing. In the scene, Corey says, “A little advice: You probably don’t want to act weird and shit in public. The way people talk in this town — I don’t need to tell you … You’re one of the Monterey Five, right?”

After that encounter, Jane talks with her friends and says, “It was just the way he said [it]. Like we all have scarlet letters on our backs.” Because of this, it seems like Jane is aware of the risks of dating him or opening up to anyone else. So far, it doesn’t look like Corey is prying or asking Jane a lot of questions. While he is undercover, he still needs to get some information from her.

On the other hand, it’s possible that Corey was trying to make sure Jane’s sexual assault was reported. Earlier in the episode, Corey and Jane are getting intimate. She begins crying and Corey comforts her. Jane’s past incident with Perry has caused her serious and lasting issues with intimacy. Up to this point, it has been hard for Jane and Corey to kiss because Jane keeps remembering Perry.

Because Corey sees how badly this affects Jane and seems to care about her, it’s possible he’s trying to take action at the police station. He may want to do something about Perry. It seems unlikely that Jane would have told him who did it. Furthermore, it seems less likely that Jane would mention that her rapist is dead.

Of course, Big Little Lies fans are hopeful that Corey just cares about Jane. He may be trying to help her file a report. From what we’ve seen, he’s great to Jane and wants to be a positive role model in her son Ziggy‘s life.

🎶otter bay, otter bay, it’s the best place of them all🎶

Overall, fans think that Jane deserves a healthy relationship at this point. If Corey ends up being an undercover cop, Jane may not be able to trust someone again.

If you watch Big Little Lies, you know that every little piece of the show means something. Corey wouldn’t be shown at the police station for no reason. This will be coming back up at some point in the show. With only two episodes left in Season 2, there is not much time to pull everything together.

What do you think Corey was doing at the police station? Do you like his relationship with Jane? Leave a comment below!

For more news about your favorite TV shows, don’t miss an update from TV Shows Ace.