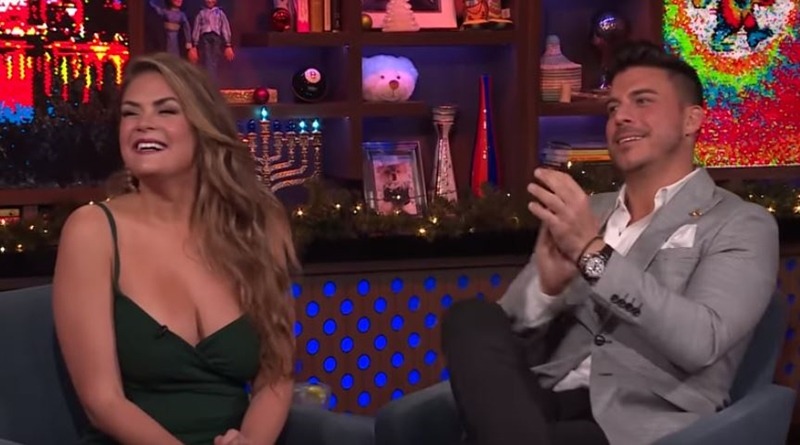 Vanderpump Rules fans know that the cast’s been doing a round of parties. The wedding party for Brittany and Jax Taylor, the after party, birthday parties and more. Now, it seems for a few seconds, the parties stopped and Brittany took the time to share about Jax’ 40th birthday. However, it became all about her shoes.

The great wedding of Jax and Brittany really took things to the next level. Many fans actually simply can’t understand the lavish event. After all, in real life, the couple served drinks and food in restaurants. Obviously, starring in Vanderpump Rules brought them more than five minutes of fame. Anyway, now it’s finally behind everyone, Jax’s birthday came along. Though he doesn’t look it, he’s now the grand of age of 40. Mind you, he worked for it, going to the gym and working out.

Brittany also worked hard at her fitness and beauty levels ahead of the wedding. She took to Instagram Wednesday night and shared a photo of the couple on a staircase. In the photo, she’s wearing a pink and white dress that looks cool and loose. She and Jax share a kiss together. But it’s the shoes that grabbed all the attention.

It’s all about the shoes Brittany’s wearing

Fans went along to see the post by Brittany and lots of them commented on Jax being forty. Plus they noted he doesn’t even look that age. Others told her to knock it off with all the wedding stuff and posting all the time. But many more spoke out about the shoes she’s wearing. One user posted, “So happy for you. Hope all your dreams come true LOVE THE SHOES!!” Another Vanderpump Rules fan wrote, “Obsessed with your shoes😻🤩.”

Maybe Brittany never expected fans going crazy for her shoes when she posted up the photo. She merely captioned it with, “Happy Birthday to my best friend, my honey, my HUBBY @mrjaxtaylor ❤️ I love you so much babeeee!! 40 never looked so sexy! 😘😘😘.” So, maybe she never noticed how many people asked about the shoes. So, far she never replied to questions about them.

Happy Birthday to my best friend, my honey, my HUBBY @mrjaxtaylor ❤️ I love you so much babeeee!! 40 never looked so sexy! 😘😘😘

However, some funny comments came amongst the fans of the show. One user asked, “But the shoes?!?😍 What are they?” Another fan replied, saying “shoes 👠 lol.” But, still, the questions kept coming with loads of people wanting to know the brand or make of those very high heels. Hopefully, Brittany sees all those questions and gets around to answering her fans.

What do you think of those shoes that stole the thunder from Jax Taylor’s birthday post by Brittany? Could you walk in those? Do you know the brand? Sound off in the comments below.