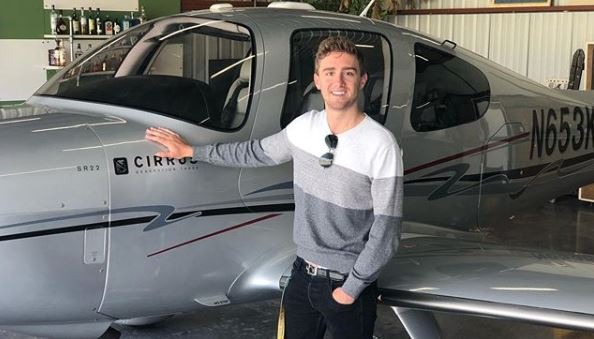 Tonight, Jack seemed a bit unsure about the relationship with Hannah B and his brother. He got the chance to meet her, but he wants his brother to be happy. Social media went crazy right away about how cute he was.

Always a blast taking you guys up for the routine casino trips! Have fun up in Wells. Love you guys!

Jack is also a pilot and shares a lot of photos of himself flying. It looks like he even takes his parents on vacations in his plane. That is a nice benefit to have.

Jack Weber does enjoy a nice cigar once in a while, plus he drinks now and then.  That is obvious from his posts on Instagram. So is he single or not? Well, that is hard to tell. Jack has posts with a girl on his page that he was obviously dating at some point. He doesn’t have any new pictures of her, though. Jack also doesn’t mention her in his bio. This girl hasn’t posted with him lately either and also doesn’t mention him in her bio. Maybe if he is single he could end up on The Bachelorette or Bachelor in Paradise someday.

How can you meet Jack and Peter?

Do you want a chance to meet Jack and Peter? Peter recently shared that they are really passionate about donating blood. These two brothers have teamed up to do blood drives all over. If you want to meet them, you can do so by going out to one of these drives and helping save a life.

Hey guys, something my brother Jack and I are very passionate about is giving blood. It’s been a dream of ours to one day start a foundation in honor of our grandmother Aurora who fought Leukemia. Giving blood and especially platelets is one of the only things that gives cancer patients relief and makes them feel good again. I want to challenge you guys to reach out to your local Red Cross and go in for a donation. I promise you the feeling of literally giving someone life is 💯worth that scary needle. Jack and I are going to start putting on blood drives around the country so keep an eye out for announcements and we can’t wait to meet you all! #givebloodgivelife #americanredcrossblooddrive

He will be sharing a lot about these blood drives which means you do have a chance to meet them.

What do you think of Peter’s brother? Share your thoughts below. Don’t miss new episodes of The Bachelorette 2019 on Monday nights on ABC.