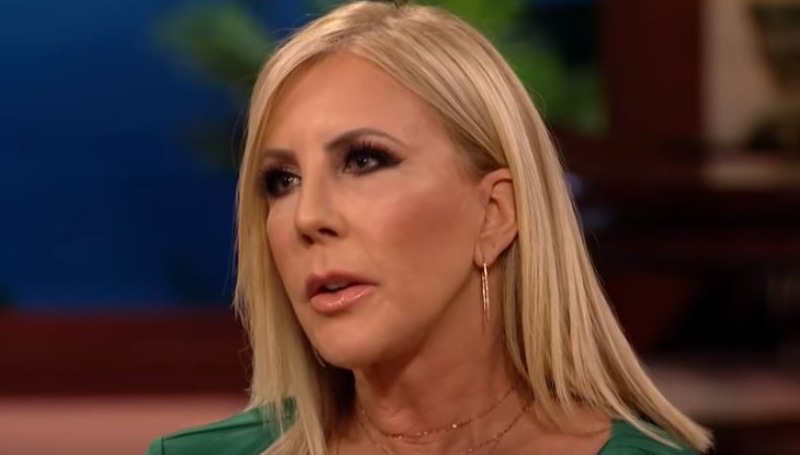 RHOC rumors started earlier this year that Vicki Gunvalson might get demoted on the Bravo show. That started when a poster for the upcoming season left her off it. Now, it’s confirmed that Vicky was demoted to a “Friend of the Housewives.” Nevertheless, she says she’s “Proud to be the OG of the OC.”

Season 14 of the Bravo show premieres on August 6 at 9 PM ET on Bravo. The new trailer dropped and there’s quite a bit of tension in it. It looks like Vicki might not miss all the drama too much. She took to her Instagram to talk about it.  Vicki said, “I am back again this season right in the middle of the action in a different role. ” Then she said that she’s “proud to be the “OG of the OC.”

Speaking a bit more about it, Vicki added, “For the past 14 years, I’ve opened up my life, my loves, my ups and downs on The Real Housewives of Orange County .” That’s a long time to live your life in the public as she does. So, maybe she can now take a step back and enjoy a bit less air time and more privacy. Vicki enjoyed her time filming and hopes everyone enjoys the upcoming season. Because she is not full-time, maybe she can stay out of a bit of the drama.

Demoted Vicki, ‘proud to be the OG of the OC’ filmed for the season

Being a “friend of the housewives” means we still get to see Vicki Gunvalson in the show, but maybe not so often. TV Shows Ace reported in May, about the rumors she might be demoted. We noted at the time, “neither Vicki or Bravo…commented on the situation, but Vicki has been filming with the other ladies. Bravo Connoisseur tweeted a photo of a May 17th engagement party Tamra Judge threw for Vicki with all the ladies in attendance.” Now, RHOC fans responded to her post about her reduced role. Here’s what some of them said:

It seems that fans are a bit disappointed with Andy Cohen. Maybe not fully understanding the situation, they slammed him for the cast changes. Perhaps Vicki does not mind it too much. Certainly, she’s not throwing any public tantrums about it.

Reduced role for Vicki’s not the first one

People reminded fans of RHOC that it’s not the first time reduced roles happened. They noted, “Real Housewives of New York City star Luann de Lesseps was demoted for season 6 before returning as a main cast member, and Real Housewives of Atlanta star Porsha Wiliams had a year-long stint as a “Friend” during season 7.

What do you think about Vicki Gunvalson being demoted but saying she’s “Proud to be the OG of the OC?” Sound off your thoughts in the comments below.

Remember to check back with TV Shows Ace often for more news about RHOC. For now, Bravo is showing reruns of the past seasons.