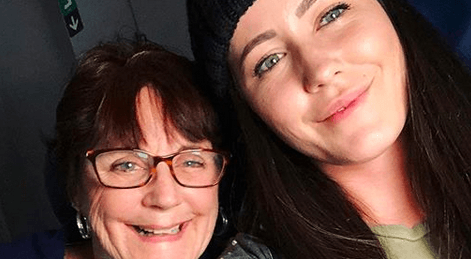 Now, she is explaining what happened. She spoke with Us Weekly about the situation. Jenelle said, “David and I were on FaceTime with Jace when we heard my mom say to Ensley, ‘Come here, I have to take a shower.’ Then she took Ensley in the other room, and we immediately heard her screaming and crying.”

Then, Jenelle says she asked Jace what was happening and “he said my mom locked Ensley in the bedroom so she can take a shower.” They asked Jace to open the door, but he couldn’t. Jenelle explains, “we called 911 for help because all we could hear was Ensley screaming.”

TMZ posted the 911 call. David can be heard saying, My mother-in-law has locked my 2-year-old child in the bedroom so that she could take a shower, and now she can’t get the door open, and my child is freaking out. She’s been screaming on the phone for the past five to 10 minutes.”

Jenelle also posted about the incident on her Instagram page. She shared an older photo of herself with Ensley. In the caption, she wrote, “Here’s why we called 911 on my Mom #LinkInBio #ChildAbuse #SaveEnsley”. Jenelle has turned off the comment feature on her recent photo.

Jenelle has been known to direct her followers to her Instagram bio. When people click on the story, she makes money. She posted something similar in her Instagram stories, urging fans to “swipe up”, which takes them to the link as well.

This all began when Jenelle’s husband shot and killed the family’s dog. This was his reaction to the dog snapping at their daughter. Later, fans saw pictures of Ensley and said that her cheeks were a little red, which could have also been from crying. She did not seem to be seriously hurt.

Then, Jenelle got fired from MTV’s Teen Mom 2. It sounds like this was unrelated to the dog killing incident. She was going to be cut from the show anyway. She has since been replaced. The incident also led to MTV and Jenelle both losing some of their sponsors.

Now, Jenelle and David have lost custody. Their children are all living with relatives.

In her statement, Jenelle said, “I am currently following what my attorney has asked. I don’t want to speak publicly on the matter currently as that will jeopardize the possibilities of getting my kids back.”

Then, she continued, “I love my kids so much and I will do anything necessary to get them back and that is all I want everyone to understand. I ask everyone to have an open heart before they judge how the media is portraying me. I love being a mother and David and I will get through this. We are staying strong and united.”

What do you think of Jenelle Evans calling 911 on her mom? Do you think it was necessary? Leave a comment below.