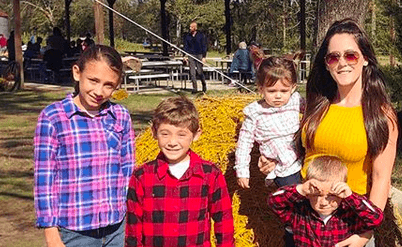 Former Teen Mom 2 star Jenelle Evans and her husband, David Eason, have been on the radar consistently for a couple of weeks. This all began when David shot and killed the family’s dog, Nugget. This was in response to the dog snapping at David and Jenelle’s two-year-old, Ensley. As a result, Jenelle got cut from Teen Mom 2 by MTV. This cost MTV a few sponsors as well.

Lately, there have been some custody issues. Because David shot the dog, there have been fears about what he could do to the children. This is causing Child Protective Services to step in and evaluate the situation.

Most recently, there has been some speculation as to whether Maryssa and Ensley will remain at the Evans-Eason household. Maryssa is David’s daughter and Jenelle’s stepdaughter. The couple shares Ensley.

Earlier today, a source spoke with Radar Online and said, “David’s family is calling to speak with a CPS worker today to let them know who his mother and two sisters are. If something happens where they try to take Ensley and Maryssa, they want CPS to have family contacts on hand so the girls won’t end up in foster care.”

What happened to the former Teen Mom 2 star’s daughters?

According to Radar Online, “A judge ordered that ALL of the ex-Teen Mom 2 star’s children should be removed from her custody.” A source spoke with Radar Online and shared, “A judge signed off on the request yesterday. It included all of the children in the home.”

Several sources then told Radar Online that Jenelle is refusing to turn the children over, even after the judge ordered her to do so. As of right now, she has yet to turn them over. It’s not known where the children are, but they are likely still in Jenelle’s care.

Prior to the judge ordering Jenelle and David to turn the kids over, Jenelle told someone that she would not be giving up Ensley. At this point, it seems like Jenelle doesn’t have much of a choice. As it’s court-ordered, it’s in her best interest to follow those orders. It seems like Jenelle is trying to keep her family together, but it’s too late for that.

Do you think it’s fair that Jenelle’s children are going to be removed from the home? What do you think will happen next? Let us know in the comments below!