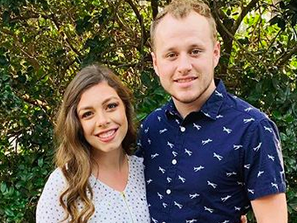 On Sunday, Counting On stars Josiah and Lauren Duggar celebrated their one-year wedding anniversary. In the morning on their anniversary, they shared a sweet post about their first year of marriage. They added a few of their wedding pictures to the post as well.

Can’t believe it’s already been a year since we said “I do”. I remember the big day and just how excited we both were about getting married. Ohh the memories! We’ve had more downs than ups than any newly married couple should ever have. We wouldn’t trade it for anything. It’s our story. We are SO blessed!❤️ Looking forward to growing old and more in love with you.

Later in the day, the couple shared a second post about their anniversary. In this one, they documented their special date night. They had a picnic outdoors. They called the celebratory dinner “Simple… but romantic”.

In the pictures, fans can see that the couple made a picnic table out of a wood pallet. The pallet was decorated with flowers, candles, and a framed photo from their wedding day. Then, they laid blankets and pillows around it so they could have a comfortable place to sit.

The post featured a couple of shots of their makeshift picnic table and dinner plates. The couple also took a few photos of each other enjoying their date outside.

In their first anniversary post, they wrote, “We’ve had more downs than ups than any newly married couple should ever have. We wouldn’t trade it for anything. It’s our story. We are SO blessed!”

Since Josiah and Lauren shared the post documenting their anniversary date, fans have been commenting about how much they love the idea. One fan wrote, “Love the idea of using a pallet for a little table!!” Another one wrote, “Simple and romantic is the best kind of anniversary dinner. Love the pallet table setting also”.

Plenty of fans commented their best wishes for the couple on their anniversary. One fan said, “That is such a nice way to celebrate an Anniversary. Happy Anniversary Josiah and Lauren.”

As usual, fans are also a huge fan of Lauren’s outfit. In the pictures, she’s wearing a pink floral dress. In the comments, one fan asked her where she got it. She replied and said it’s from Amazon.

From what it looks like, Josiah and Lauren had a lovely anniversary date. They seem to be happily married and excited about their future together. In their post earlier, the Duggar couple wrote, “Looking forward to growing old and more in love with you.”

What do you think of Josiah and Lauren’s sweet anniversary date? Are you excited for their little one to arrive this fall? Leave a comment down below.