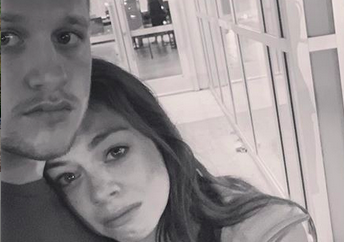 A source recently shared that Josiah and Lauren Duggar were trying to get pregnant. Since then, we’ve all been patiently waiting for a pregnancy announcement from the newly married couple. Now, they have just released an update on the Duggar family’s website.

In this update, Josiah and Lauren Duggar explain how they were able to get pregnant a couple of months ago. Then, Lauren says, “suddenly thereafter, we lost our baby.”

Then, Josiah says, “It really was a hard time for our family, just going through this right after we got married and all the dreams of getting to see our little one and hold it in our hands were dashed before our eyes.”

Lauren then explains why they shared this sad news with the world. She says, “We really wanted to share our story because we know a lot of people go through a miscarriage, but nobody really talks about it. So we just wanted to let y’all know that you’re not alone.”

It’s obvious that the couple is not trying to share this information for attention. It is something that is very hard for them to talk about, but they know how common miscarriages actually are.

Finally, Josiah thanks fans for their prayers during this time. They seem appreciative of all of the support they have gotten from fans so far.

The clip then cuts to a scene from Counting On. In this scene, Lauren is talking about the miscarriage. She says, “I couldn’t believe it and I was hoping it wasn’t true.” It looks like this could probably air on tonight’s show when the new season of Counting On starts.

Speculation about Josiah and Lauren Duggar having a miscarriage

Posted by Duggar Family News: Life is not all pickles and hairspray. on Sunday, February 10, 2019

Additionally, there was some speculation a possible miscarriage because Josiah and Lauren Duggar had yet to announce a pregnancy. They have been married for eight months and the Duggars usually don’t wait to get pregnant.

Naturally, some fans were starting to wonder if something might be wrong. They were thinking that the couple might be having trouble getting pregnant or that they had a miscarriage. Many fans were assuming they would get their questions answered with the start of the new season of Counting On.

It’s definitely a heartbreaking time for Josiah and Lauren Duggar, along with the rest of the Duggar family. From the video, you can tell that they are devastated about the miscarriage.

For more updates about the Duggars, don’t miss Counting On on TLC tonight!