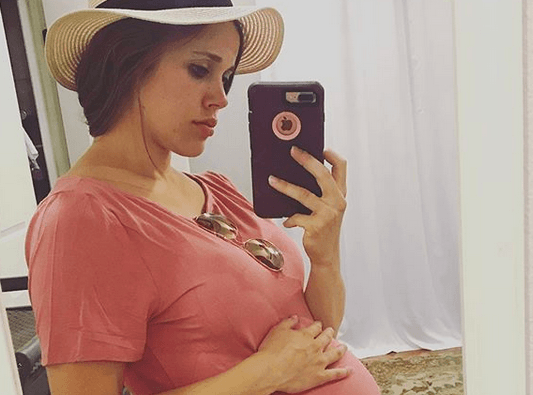 On Tuesday, Jessa Duggar Seewald shared an exciting update about her newest baby, Ivy Jane. Ivy was born on May 28. She is the first daughter for Ben and Jessa Seewald, who are also the parents of Spurgeon and Henry.

On Instagram, Jessa posted a few new pictures of her baby girl. One of the pictures features Henry giving his new baby sister a kiss on the cheek. In the caption, Jessa says, “Can’t believe she’ll be a month old tomorrow. She brings so much joy to our lives!”

Can’t believe she’ll be a month old tomorrow. 💜 She brings so much joy to our lives! . Looking forward to more baby girls coming this fall! 💜💜💜 @annaduggar @littleduggarfamily @siandlaurenduggar

In the comments, fans are saying that Ivy looks just like Henry and Spurgeon. They are also saying that she has the Duggar nose and looks a lot like the rest of the Duggar family.

Since Ivy was born, Jessa has kept fans updated via social media. She has been sharing sweet pictures of Ivy as she grows. The rest of the Duggar family has been visiting Jessa’s family and they have shared photos with the newest addition.

Congrats @jessaseewald and @ben_seewald on little Ivy Jane! 💕Love her so much and love the name! Such a little doll! 🤗

In addition to the news on her Instagram account, TLC also aired a Counting On birth special about Ivy’s birth. It can also be seen on TLC’s website.

Duggar baby girls on the way

In Jessa’s post, she added, “Looking forward to more baby girls coming this fall!” There are currently three baby girls on the way for this family.

Several Duggar women are currently expecting babies. Anna, Lauren, Kendra, and Joy-Anna are all due in November this year. Recently, Anna shared a gender reveal video on Instagram and announced that she is pregnant with a baby girl.

Tuesday was a big day for Duggar family announcements. Both Kendra and Lauren announced that they are expecting girls in November as well.

On Jessa’s post, one fan commented, “Anyone know what joy is having? Or is she keeping it secret? Your family is so blessed.” In response, Jessa said that Joy hasn’t found out. It’s unclear whether Joy and Austin will be finding out the baby’s gender before birth. With the way things are going, it’s possible that Joy will be having a girl as well.

As of right now, Kendra, Lauren, Anna, and Joy are the only pregnant Duggar women. In a recent post, Jessa hinted that another sister may be expecting. Fans are speculating that Abbie will be the next to have a baby, but no announcements have been made.

What do you think of the pictures Jessa shared? Are you excited for all of the baby girls joining the Duggar family? Let us know in the comments!