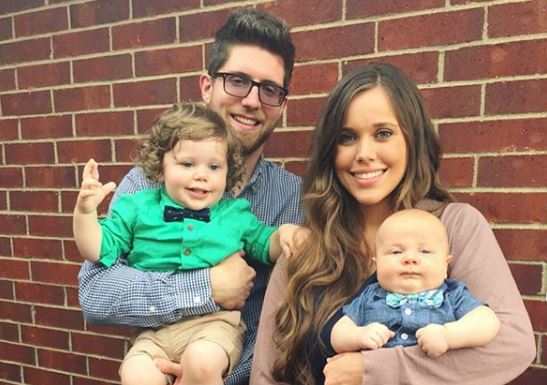 Jessa and Ben Seewald just had their baby. Fans are excited to hear the news that their little one is here. They already have two little boys and the couple didn’t reveal the gender before the baby was born. The Duggar Family Blog shared all of the details.

Jessa and Ben Seewald had their first little girl yesterday!  They have named her Ivy Jane Seewald. The couple must be excited to have a girl. There has been a lot of new babies recently for the Duggars. The couple shared a statement about her birth.

Jessa and Ben shared saying, “Ivy Jane Seewald was welcomed into the world Sunday, May 26th. We were getting ready for church when my water broke, and we were thinking ‘Well, I guess we have a change of plans!’” After three and a half hours of labor, Ivy was born at 5:57pm. Her due date was June 5th, and since both of our boys went five days past their due date, we thought we would go late again. We were so surprised when she came two weeks earlier than her brothers. We definitely weren’t expecting that! Ivy was born at home weighing 7lbs 14oz and 20 1/2 inches long. “She feels so tiny compared to her siblings!” Spurgeon was born at nearly 10lbs, and Henry close to 9lbs. “We’re so grateful to God for this precious gift. She is already so loved. Her big brothers adore her! – Ben and Jessa”

Totally looked like baby was responding to big bro’s sweet kiss (and little bro’s monster truck driving)! 💙👦🏻👦🏼 . Watching Spurgeon anticipate the arrival of his new sibling has got to be one of the sweetest parts of this pregnancy. 😍 Henry will pat my belly sometimes and say “Baby!” because he sees us do that, but I don’t think he truly comprehends what’s about to take place. ☺️ . Little less than a month to go! #BabySeewald3

Jessa Seewald was in labor for three and a half hours before giving birth to Ivy. It sounds like this one went a bit smoother than labor in the past for her. She was actually two weeks early, so it came as a bit of a shock to the couple. They did have a home birth this time and it worked out. Some fans wondered if she would go straight to the hospital after issues she has dealt with in the past. She was much smaller than the babies that Jessa had in the past. Hopefully, she will be on the show Counting On if TLC ever shares about it coming back.

Ivy Jane has our hearts already! We are so happy for Ben, Jessa, and the boys that a sweet little Seewald girl has arrived! 💓

Posted by Duggar Family Official on Tuesday, May 28, 2019

Are you excited to hear that Jessa and Ben Seewald just had a little girl? Share your thoughts in the comments section below. Don’t miss new episodes of Counting On on TLC. So far, they haven’t shared when the show will return.