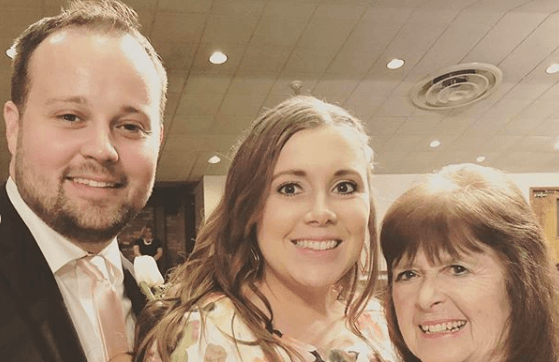 On Sunday, Anna Duggar celebrated her 31st birthday. On her Instagram account, she shared a video of her family celebrating with her. She also included a few photos of the festivities.

In her caption, Anna writes, “Turned 31 years old today and I have so much to be thankful for! 11 years ago today I said, ‘Yes!’ to the man of my dreams! So grateful for God’s grace and redemption over our family! 5 beautiful, healthy, and energetic growing kiddos and one more on the way!”

Turned 31 years old today and I have so much to be thankful for! 11 years ago today I said, “Yes!” to the man of my dreams! So grateful for God’s grace and redemption over our family! 5 beautiful, healthy, and energetic growing kiddos and one more on the way! #littleduggars #mybirthday #31 #Anna #Duggar #family

In response to her birthday post, Anna received plenty of birthday wishes from her friends, family, and Duggar fans too. Jill Dillard and Kendra Duggar each wrote a short message wishing her a happy birthday. Based on the pictures, it looks like Anna celebrated at Jim Bob and Michelle’s home.

On the post, Anna also got a comment from cousin Amy King. Amy’s comment reads, “Love you sweet girl, you’re brave, you are forgiving, a great momma , and stronger than I could ever be.” At first, fans thought this message was sweet. Then, fans realized that it might mean something more, especially because Anna’s post also included Josh.

If you’re a Duggar fan, you know about Josh’s history. In 2015, Josh admitted to molesting five girls. This included four of his sisters and one other girl. These incidents took place between 2002 and 2003. In addition, Josh’s account information was found on a cheating website where he had multiple accounts.

Since this information has gone public, Anna has not separated from her husband. This is likely due to their Christian religion that is against divorce. It’s unclear what exactly they have done to move past those incidents.

Because part of Anna’s Instagram post was about her and Josh’s engagement, it makes sense that Amy’s comment could be critical. She could be applauding Anna for being “brave” and “forgiving” despite what Josh has done in the past. Fans do think she is throwing shade at her cousin Josh though.

In the comments, one fan writes, “Emphasis on forgiving am I right ladies.” Another Duggar fan commented, “With the amount of hell he has put you through, he should be kissing the ground you walk on.” It’s safe to say that fans aren’t over the past incidents and they agree with what Amy had to say. It’s unclear whether Amy was actually throwing shade or not.

Of course, members of the Duggar family are no stranger to criticism. These comments are not a huge surprise to fans of the family.

What do you think about cousin Amy Duggar King’s comment? Do you think she was being sweet, or do you think it has something to do with Josh’s history? Let us know in the comments below.