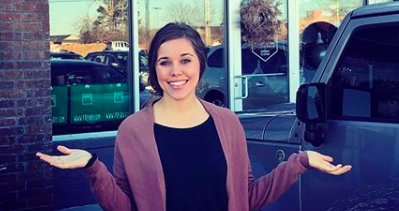 Jessa Duggar Seewald and the rest of the Duggar family members are used to receiving unsolicited advice in the comments of their social media posts. No matter what they post, somebody has something to suggest.

She is the mom of two boys, Spurgeon and Henry. She is currently expecting her third child with her husband Ben Seewald. Though she only has two children of her own, Jessa did help raise her younger siblings. It’s safe to say that she has a good idea about how to care for children. Still, that advice keeps on coming.

Recently, Jessa Duggar Seewald shared a video of her two sons playing in a treehouse in their backyard. She says that they are “enjoying the beautiful nearly 60-degree weather in our backyard today!”

Enjoying the beautiful nearly 60 degree weather in our backyard today! Can you tell we’ve been feeling a bit cooped up? 😆😄💙

In the center of the treehouse, a few tree trunks are shown coming up. Of course, one of her followers had some advice to share. In a comment, the fan told Jessa Duggar Seewald that there wasn’t enough room for the trees to continue to grow. 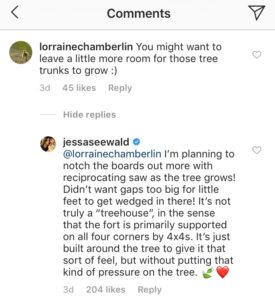 As mentioned before, Jessa Duggar Seewald is no stranger to these types of comments. In a comment, she replied and said that she is “planning to notch the boards out more with reciprocating saw as the tree grows. Didn’t want gaps too big for little feet to get wedged in there!”

Next, she goes into detail about the treehouse and how it was built. The entire response ended up being a long paragraph. She needed to make sure she covered all of her bases so she wouldn’t have any additional comments like this.

On another one of her posts, fans went crazy over Meredith Duggar, Josh and Anna Duggar’s daughter, having dirty feet. In response, Jessa Duggar Seewald explained that it was nice in Arkansas and that the children had been playing outside.

Merry Christmas from our family to yours! Hopefully there is none of 👆🏽this going on at your house. 😆 The gifts are fun, and the food’s gonna be great, but let’s not forget the reason for the season. . For unto you is born this day in the city of David a Savior, who is Christ the Lord. – Luke 2:11 . The saying is trustworthy and deserving of full acceptance, that Christ Jesus came into the world to save sinners, of whom I am the foremost. – 1 Timothy 1:15 . 16 "For God so loved the world, that he gave his only Son, that whoever believes in him should not perish but have eternal life. 17 For God did not send his Son into the world to condemn the world, but in order that the world might be saved through him. 18 Whoever believes in him is not condemned, but whoever does not believe is condemned already, because he has not believed in the name of the only Son of God. – John 3:16-18 . 6 For to us a child is born, to us a son is given; and the government shall be upon his shoulder, and his name shall be called Wonderful Counselor, Mighty God, Everlasting Father, Prince of Peace. – Isaiah 9:6

Since Jessa Duggar Seewald seems to be a pro at responding to these comments, it’s safe to say that they don’t really bother her. She clearly knows how to care for her kids and knows what’s really important. Hopefully, these fans eventually stop giving the Duggars unsolicited advice, but who knows?

Do you think the Duggars receive too much advice from their followers? What do you think of the way Jessa Duggar Seewald handled this one? Be sure to catch Counting On when it returns to TLC on February 11!