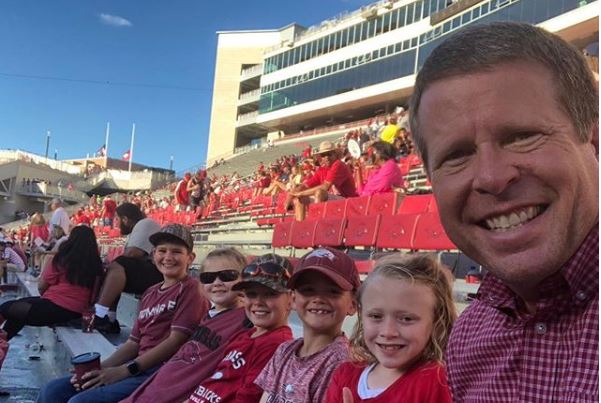 Counting On fans know that Michelle and Jim-Bob Duggar spawned a whole tribe of kids. In fact, 19 Kids and Counting, the forerunner to Counting On, showed those kids growing up. Actually, some of them are still growing up. Meanwhile, other kids married and babies like Jinger’s little girl, Felicity joined the tribe. Now, an astonishing fact emerged. Apart from twins Jana and John David and Jed and Jeremiah, only two people in the family share birthdays.

The most recent addition to the Counting On Duggar family is baby Ivy Jane, the third child of Jessa Duggar and Ben Seewald. Ivy Jane has two brothers, Spurgeon and Henry. Ivy’s special for more than one reason, as it turns out she’s the only Duggar who shares a birthday with another in the family. The fact that she arrived in the world a bit earlier than expected makes the coincidence even more amazing. Cheat Sheet noted that she arrived on the same day as her “great-grandma Mary.” They also pointed out that “on the Duggar’s official Facebook page, the family wrote that “May 26th is one of our very favorite days!” because it was Jim Bob’s mom’s birthday.”

Now that news prompted another post that came to Instagram from the @duggarfam verified account. According to their post, Jim Bob’s mom Mary is the only other person in the family who shares a birthday in the clan. Of course, they note the twins don’t count in that respect. Here’s what they posted to Counting On fans: “Besides the twins, Great Grandma Duggar and Ivy are the only ones in the family to share a birthday!”

Besides the twins, Great Grandma Duggar and Ivy are the only ones in the family to share a birthday! . It’s hard to believe little Ivy Jane is already one week old today! 🎂 @jessaseewald

Counting On and 19 Kids and Counting really accumulated a lot of devoted fans. Perhaps some of them already realized that only two of them share birthdays apart from the twins. But, these days, the family expands and it’s a bit difficult to keep track of everyone. Potentially, there’s enough of them in Jim Bob’s direct line to celebrate several birthdays every month. That’s where most of us would leave it.

Luckily for those who want all the details, Entertainment Tonight (ET) dug up the facts for Counting On followers. They wrote, “As the eldest Duggar kids are growing up, getting married and having kids of their own, it can be hard to keep track of everyone. Here’s ET’s handy Duggar family tree — from Jim Bob to Josie — tracking marriages, births and all the other big announcements!” If you’re a Duggar fan, that’s a useful article to catch up on who’s who in the ever-expanding family.

What do you think about the fact that the Duggar family only has two people who share a birthday apart from the twins? Does that blow your mind? In any event, that should eventually change as the family’s expanding in size almost every month. Sound off your thoughts in the comments below.