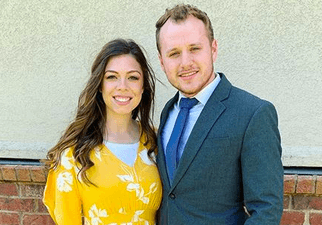 On Thursday, Lauren Swanson Duggar posted on her and Josiah’s shared Instagram account. She shared a couple of maternity pictures. These are some of the few pictures we have seen of Lauren’s bump except for the announcement photos.

In her caption, Lauren says, “So thankful for you” and adds a baby emoji. Then, she includes a Bible verse, which reads, “Psalm 139:13-14 ~ For thou hast possessed my reins: thou hast covered me in my mother’s womb. I will praise thee; for I am fearfully and wonderfully made: marvellous are thy works; and that my soul knoweth right well.”

On Thursday, Anna Duggar also posted a photo of the five pregnant sisters. The photo was taken on Easter Sunday before some of the pregnancies were announced publicly and before Jessa Seewald gave birth.

What are fans saying about these new pictures?

Fans of the Duggar family are loving the new pictures that Lauren has posted. Everyone is commenting and saying how beautiful she looks. They love her dress, which led to some fans asking where it’s from. In the past, Lauren has seemed happy to respond to comments. Of course, she let fans know that it is from Old Navy.

On the post, a couple of family members also added comments. Here’s what they had to say:

Throughout her miscarriage and this second pregnancy, Josiah and Lauren’s friends, family, and fans have been very supportive. Since they first shared about the miscarriage, the couple has received lots of encouragement in their Instagram comments.

Though the miscarriage was very hard on the newly married couple, they made it through with all the support they received. They took the opportunity to connect with others who had been through the same experience. They wanted to make others feel less alone.

When is Lauren Duggar due?

Though an exact date has not been shared, we know that Lauren is due in November. What’s interesting is that all four of the pregnant Duggar sisters are also due in November. This includes Anna, Kendra, Joy-Anna, and Lauren.

With four babies coming in November, this will be a busy holiday season for the Duggar family. We’re sure they are very excited for all these new additions though. From what the family members have shared so far, they all seem happy!

What do you think of the new pictures of Lauren? Do you love them as much as we do? Let us know in the comments!