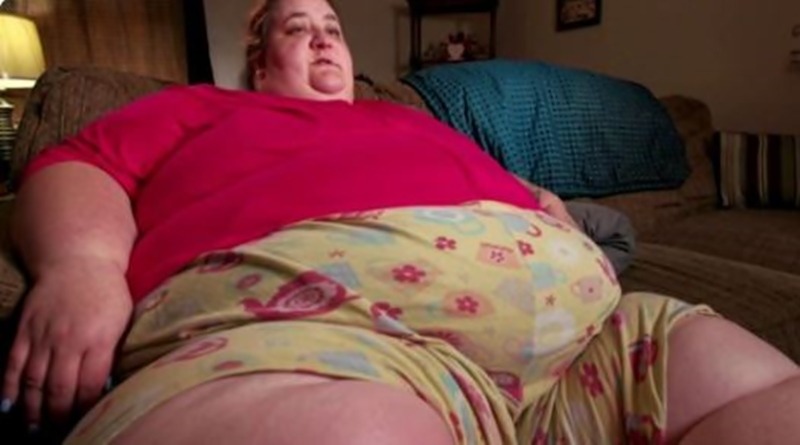 My 600-lb Life‘s Angela Johns not taking responsibility for her own failures annoyed people. Plus, she gave her husband uphill and really got up the noses of TLC fans. Always arguing with Dr. Now was plain and simply ridiculous. Then, she managed to get diagnosed over the phone as using drugs. The failed positive toxicology report proved that. Now, Angie claims she’s finally down to her target weight for weight loss surgery. Plus, she’s filming and oh yeah, her hubby abandoned her in Texas.

My 600-lb Life‘s Angela John’s nasty to her daughter, and rude to Dr. Now

Fans of my 600-lb Life grew irritated with Angela as we saw her being nasty to her own daughter Desiree. Actually, she could end up the same way as her mother before she hits her late teens. It’s a really dysfunctional environment. And to top it off, with her heavy smoking and even drug use, she tells Dr. Now, nope to going into rehab. That kind of attitude annoys fans. Their obvious impression is someone who wants to try should get a chance at life-saving weight loss.

Anyway, the failed attempts at losing weight led her back to Ohio where she popped up a Go Fund Me. There, she said she suffered cruelty from her parents who “ignored” her and she got “sexually abused.” Plus, her addict parents allegedly were abusive. Now, that’s a nightmare nobody wishes on anyone, but maybe it’s time to smarten up and listen to the doc? Well, maybe she did that, as she claims she’s filming again.

I’ve watched all episodes of my 600 lb life with @NowzaradanDr. As always, I root for patients to be successful. However, after watching the episode with Angie J, I’m disappointed in her attitude and aghast that she is not appreciating all Dr. Nowzardan is doing to help her

Fundraiser to return to Houston, then to meet expenses

Initially, the fundraiser was meant to help her return to Houston. Apparently, she wanted to be there as those who do relocate closer to Dr. Now often get more success. Her some-time hubby Justin Micheal would go with her. Anyway, somehow she raised the funds and apparently went back to Houston. Now, the fundraiser notes that she needs money to meet expenses as it’s way more expensive than living in Ohio. So far it raised $167.00.

Appealing to My 600-lb Life fans, Angela wrote, “I moved here to Houston a couple months ago and the expense was way more than I expected and I have a lot of debt behind that. Also, I’ve acquired a lot of medical bills since I’ve been here. I did not anticipate the cost of living in Houston when I left Ohio but I need to be here so that I can continue my journey! I am doing much better mentally but financially I’m struggling I’m trying to hold on to everything I can to stay here and finish my journey.”

Starcasm reported that Angela wrote, “I have been here in Texas now for over a month as you have seen in my episode. A week ago my husband decided this wasnt for him and he left! leaving me here in an apartment i cant afford all by myself living in a state i know NO ONE! I was burglarized in my home on April 30th and Justin left on May 1st”

Plus, My 600-lb Life’s Angie J added that she’s filming at the moment as well as getting approved for surgery! “im doing the 2nd episode now! i am finiding myself i just need a little help for a moment! im trying to stay here to finish what i started! so anything will help! im 128$ short on my rent thats with giving my whole income up! that leaves me with nothing which is fine as long as i can live here til im done!!! thanks in advance ♡ god bless you all!”

Angela Johns filming for My 600-lb Life, Where Are They Now?

Right, so now you know that according to Angela, she’s probably filming for Where Are They Now? In summary, it looks like somehow she managed her relocation to Texas. There she got robbed and hubby departed. Alone, she needs money for basic expenses and medical bills. She’s met the weight loss target for her surgery. Plus, she’s filming again.

Well, seriously? If she did all that, kudos to her. Maybe she dug deep and found a massive attitude change. However, as loads of fans of My 600-lb Life simply could not stand her, not too many are likely to throw a happy party.

What do you think about these claims by Angela Johns? Do you think she finally got herself together to meet her weight loss goals? Do you want to see her on Where Are They Now? Sound out your thoughts in the comments below.

Remember to check back with TV Shows Ace often for more news about My 600-lb Life.