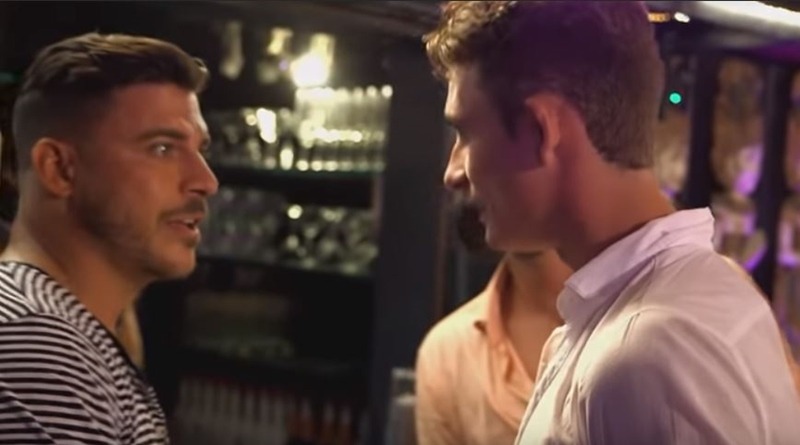 Vanderpump Rules fans saw major drama on the reunion over allegations that Jax Tayor created a fake Twitter account in the name of James’ girlfriend, Raquel Leviss. Allegedly, he used it to accuse the DJ of cheating.  The whole scene devolved and ended up with Andy Cohen needing to pull the two guys apart. So, it’s a bit of a surprise that Jax Taylor’s surprisingly laid back about a fake Twitter account in his name that popped up a few months ago.

Just to recap a bit in case you missed, it, E! News reported on the mega-drama over the fake Twitter account in the reunion. They wrote, “James brings up even more Twitter drama to retaliate, alleging Jax made a fake Twitter under Raquel Leviss’ name and said Jax’s phone number was connected to the account. Jax denies it happened, and the guys both start puffing out their chests. Cue Andy Cohen! Andy gets between the guys before any physical interaction can happen, so then Jax and James resort to insulting each other’s girlfriends. James says Brittany Cartwright looks like a disco ball.”

Of course, for Bravo viewers, it’s all great entertainment, which is why they keep going back for more. With all the Twitter drama, one could maybe expect the Vanderpump Rules star, Jax, to get livid over any kind of fake Twitter account. However, maybe Jax really is growing up now family life approaches with his bride Brittany. He’s thinking kids and that kind of thing, so maybe his new-found maturity stems from that.

On May 15, a Twitter user posted to Jax’s Twitter about a fake account they discovered. @Justicejcd posted up a photo of the other Jax account, saying, “@mrjaxtaylor you have a person claiming to be you on twitter and sending DM’s here’s their twitter handle.” While we don’t know who they sent DMs to or what they contained, that was rather interesting.

@mrjaxtaylor you have a person claiming to be you on twitter and sending DM’s here’s their twitter handle pic.twitter.com/IuQ0N4yfZf

TV Shows Ace went across to the account to find out more. Actually, it’s rather boring, but probably because the new account in the name of @Jax16933737 only started up in March this year. The profile pic’s of Jax Taylor from Vanderpump Rules and the cover photo shows the Jax line of premium mixers. Other than that, the account details show the fake Jax has coffee as their favorite and “I love to Block people.” Other than that, it seems the account location is “Los Angeles, CA/Detroit, MI.” And, shame it has only two followers.

Jax reacted to the news of a fake Twitter account. Actually, he seemed totally not worried about it at all. Rather maturely, he said, “Not verified, and that handle is a bit long. But it’s all good it doesn’t bother me. If it makes this person’s life better than I am all for it.

” One fan of Vanderpump Rules replied to Jax, saying, “You’re awesome, keep being you

What do you think of Jax Taylor hearing about a fake Twitter account in his name and being so laid back about it? Do think he’s getting a lot more mature than he used to be? Do you feel sorry for the person who only got two followers? Sound off your thoughts in the comments below.