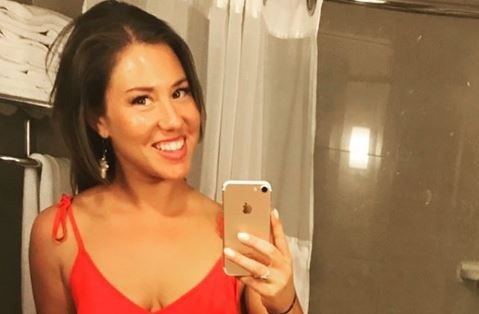 Married at First Sight still has about a month ago before the premiere of Season 9 of the reality hit and a genuine leap of faith taken by four daring couples.   Last season, the series and its experts celebrated the success in staying together for Married at First Sight matches, Stephanie Sersen and AJ Vollmoeller, and Keith Dewar and Kristine Killingsworth. If you remember Jaclyn Schwartzberg from Season 6, she didn’t get her love story she hoped for.

Sometimes, success in togetherness takes more than the brief weeks of filming a Married at First Sight season. Sometimes, it takes finding the right someone.

Fans will remember that Season 6 of the show brought together one of the most heartwarming unions in Married at First Sight’s lore. It also had its share of heartbreaking hurts.

Jaclyn Schwartzberg and Ryan Buckley were one of the couples from Season 6 who also made the choice to stay together.  Sadly, though, the pairing couldn’t pull it off.  Jaclyn and Ryan filed for divorce in June of 2018.

Love and hope are ever-possible, however, and Jaclyn Schwartzberg, had every reason for her huge smile and the lovely ring on her hand, as reported by UPI and Reality World on May 13.  The Married at First Sight favorite announced her engagement on Instagram to her new love, Dane.

Jaclyn Schwartzberg’s love story was very worth the wait

Beaming smiles from Jaclyn and Dane lit up the photo shared by Schwartzberg.  Her caption thanked well-wishers for “your love and messages.”  Her biggest gratitude was for her fiancé, as her words gushed that “I have always just wanted to feel this loved by someone. You were worth the 30 now 31 years to find it.”

The engagement ring is lovely, but the contentment in the faces of the couple displays the real beauty.

Jaclyn gave Married at First Sight her all with Buckley, who truly seemed passionate about his wife. At the same time, he seemed unwilling to make the complete decision for marriage.

Buckley worked long shifts as a Boston firefighter and often went out with the boys instead of rushing home to his wife, even when she was sick.  Another sticking point was that Ryan wanted to hold onto his old “bachelor apartment” even after he and Jaclyn were living together.

Dane was first noted on the scene for Jaclyn last New Year’s Eve, when she celebrated with sister Married at First Sight gal pals, Molly Duff, Mia Bally, and Amber Martorana in Scottsdale, Arizona.  Dane supposedly took most of the pictures of the ladies.

In November of last year, Jaclyn began hinting that she was “lucky” to have an “adorable” someone in her life. She never confirmed a dating relationship until January.  The two also traveled cross-country from New York to San Francisco.  According to Jaclyn’s description, Italy was the location where Dane popped the question.

Among the most joyful of Jaclyn’s congratulations was one from Dr. Jessica Griffin, who wrote that “I’m so thrilled you finally have it,” referring to her true and lasting love.  Griffin understands that satisfaction on a very personal level.  She is engaged to Jon Francetic from Season 6.   Francetic was denied marital fulfillment from Molly but seems destined to spend forever with the Married at First Sight expert.

Ashley Petta from Season 5 sent her congratulations to Jaclyn and Dane.  The experts always remind each couple that even if they do not stay together, the lessons they learn about themselves individually and together will better prepare them for solid marital success in the future.

Shawniece Jackson and Jephte Pierre learned that even the simple things, like sleeping in the same bed, take some time.  Through the tears and the trials, they stayed connected and remain doting parents to their daughter, Laura Denise.  There is no successful marriage that just happens– it always takes work, but the rewards are worth it.

Engagements and wedding memories can lead to long and satisfying years together. Married at First Sight fans will take that journey again with four new couples.  Season 9 begins June 12 on Lifetime.